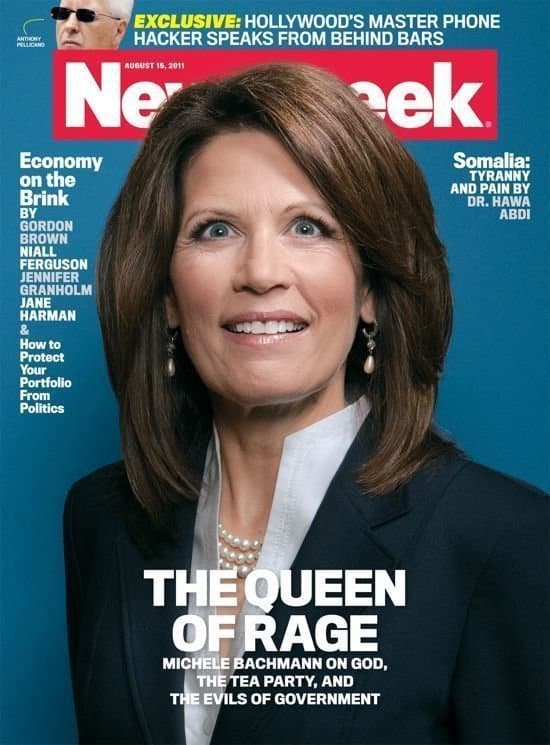 Michelle Bachmann, the former Minnesota congresswoman and 2012 presidential candidate, is opening up about her infamous 2011 Newsweek cover that earned her the nickname, “Crazy Eyes.”

In an interview with podcast “Candidate Confessional”, Bachmann divulges the culprit behind that photo: a strobe light.

According to Bachmann, it was the use of a strobe light in a last minute shot with photographer Chris Buck that caused her startled expression. Bachman reportedly had previewed a series of excellent photos from her shoot with Buck and was on her way out when he asked for one more photo. Bachmann remembers, “I was just about to leave, and the photographer said ‘You know, I didn’t get my test shot of you. And I said ‘What are you talking about?’ He said, ‘I need to have a test shot to send to my editor.’” More via The Huffington Post:

Bachmann says that Buck had her sit on a bottom rung of a ladder in a closet-like space, in front of a stark blue background. She remembers complaining about this setup: “It was very uncomfortable, because I had to kind of squat down on this ladder and I said, ‘I don’t even know why we we’re doing this. You’ve got your shots.’”

But Buck reportedly insisted. He hit a strobe light and snapped the infamous photo.

The photographer, however, has a different account of how things went down that day. According to Buck, “She might have some legitimate argument against that picture being used, but the idea of that being a light test is not a good one. I ultimately felt it was a fair depiction of how she carried herself.”

Newsweek‘s cover photo of Bachmann was roundly criticized for being sexist:

“I hate it when Michele Bachmann makes me defend her… I doubt Newsweek would portray a male candidate with such a lunatic expression on his face,” author Jessica Grose wrote in Slate.  “As much as it pains me to admit it Bachmann is a legitimate candidate and major magazines should treat her like one.”