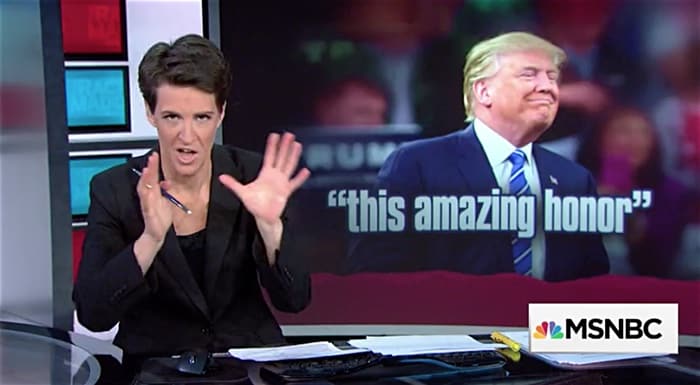 Maddow notes that while Trump’s birther rhetoric has disappeared completely since the 2012 campaign which took Obama’s birth certificate as its key talking point, Trump is still holding hands – very tightly, in fact – with conservative birther rag WND and will appear at a tribute for its founder Joseph Farah.

But just the fact that [Trump] doesn’t want to talk about [birtherism] anymore and the fact that it is mostly out of favor doesn’t mean that there aren’t still corners of the conspiratorial conservative media world where President Obama’s birth certificate is still definitely a forgery and his status as a secret alien is still a very compelling contemporary issue. The headquarters of that basically is of course our friends at WorldNetDaily. And WorldNetDaily was always kind of the headquarters for the Obama birth certificate conspiracy theory.

Yeah, you didn’t know, did ya?