You are here: Home / Gay Teen’s Amazing Mom Takes Out Newspaper Ad to Celebrate His Coming Out: WATCH 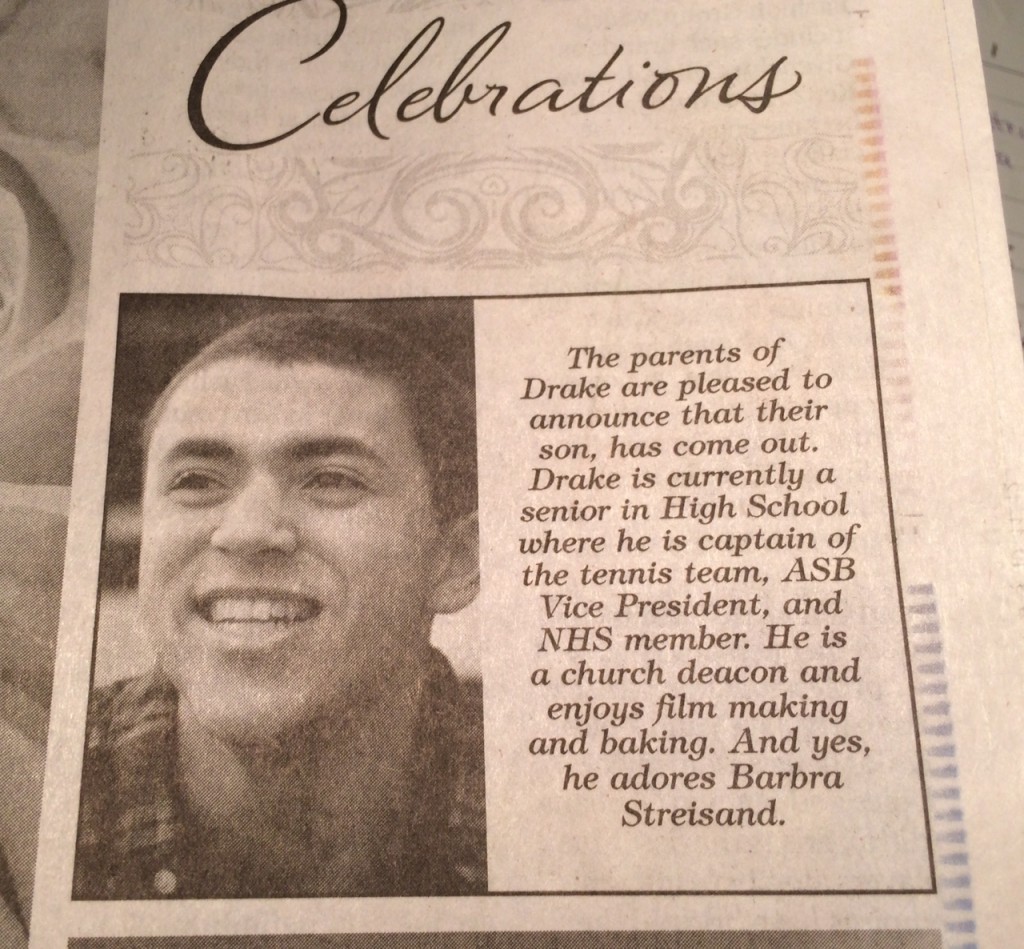 One mother was so upset about the repeal of Houston’s Equal Rights Ordinance that she took out a $200 ad in the city’s daily newspaper to celebrate her son’s decision to come out as gay.

Joan Wilson is the mother of Drake Wilson, a 17-year-old senior at Snohomish High School in Washington state. Although the Wilsons live 2,000 miles away, and Drake Wilson came out to his mom nearly two years ago, Joan Wilson placed an ad (above) in this Sunday’s Houston Chronicle saying:

“The parents of Drake are pleased to announce that their son has come out. Drake is currently a senior in High School where he is captain of the tennis team, ASB (Associated Student Body) Vice President and NHS (National Honor Society) member. He is a church deacon and enjoys film making and baking. And yes, he adores Barbra Streisand.” 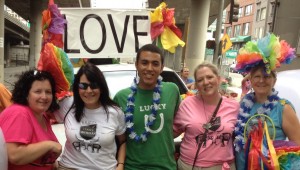 Joan Wilson (second from right in the photo at right, marching with Drake in Seattle’s Pride parade) told The Texas Observer that she took out the ad in response to the landslide vote against HERO in November:

“I couldn’t think of a better place than Houston, out of the entire country, where they needed to hear my message of pride,” Joan Wilson said, adding that she believes her son was born gay and created by God. “My announcement was my way of humanizing the issue. …

“We are blessed to live in a state which has passed anti-discrimination laws,” Wilson said. “As a mother, I have much trepidation in thinking my son might one day live in a state such as Texas.”

According to the Observer, Drake Wilson came out to his mom on Valentine’s Day in 2014, but didn’t plan to come out publicly until he went off to college. Then he watched “The Normal Heart,” the TV adaption of Larry Kramer’s iconic play about the AIDS crisis, which inspired him to come out sooner. 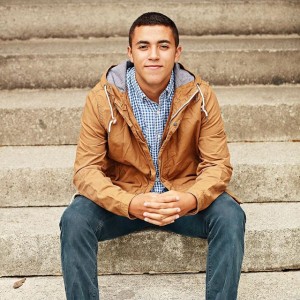 Drake Wilson revealed his secret to the world in a lighthearted YouTube video that summer, while his mom launched The Society of Lucky Mothers, a group that celebrates LGBT children.

Here are Joan Wilson’s responses to a few of my other questions:

Aside from the photo and his first name, the ad left Drake mostly anonymous, and I had to do a bunch of Google searches to track him down. Was this intentional, and if so, why?

“Well, I have attached the original announcement. Interestingly, the paper called and needed Drake’s permission to print it. Also, they called back and thought it needed to be more anonymous, so I agreed to not identify his high school. However, they never said anything about taking out our last name — a little upsetting.”

I noticed on Drake’s Instagram that he identifies as biracial (half black, half white). Did being in an interracial marriage make it easier for you to accept and celebrate your son’s sexual orientation?

“No, I don’t think the interracial thing affected anything at all, except that we as a family, do see the relationship of being born gay and being born black as biological components of a person and that the Bible has been used to perpetuate bigotry towards both. Luckily, my husband and I have gay friends and were able to see things in Drake at a young age which indicated the possibility he would be gay. Of course, we needed to wait until he acknowledged it to us. In hindsight, I would have done things differently and talked about being gay at a much younger age, but that is a whole ‘nother story.”

From your essay on The Society of Lucky Mothers website, it sounds like you may have attended a fairly conservative church (or at least knew people who did). Have you continued going to the same church since Drake came out?

“Yes, we still go to the same church. I’ve gone their my whole life and my kids, their whole lives. My husband is not much of a churchgoer. Our pastors are very affirming. We have a lot of elderly at our church. I would say there is about a 50-50 split on the gay issue in our church. And, I would add, that most of them are trying to get there; but, Sodom and Gomorrah is a strong story to overcome. This is why I recommend “God and the Gay Christian” by Matthew Vines to Christians struggling with the issue. Everyone at church does love Drake and I think knowing him has changed a lot of hearts and minds. I think Christians would be shocked if they knew how many people they have marginalized and turned off of Christianity because of their exclusivity and bigotry.”

Watch Drake’s coming out video below.