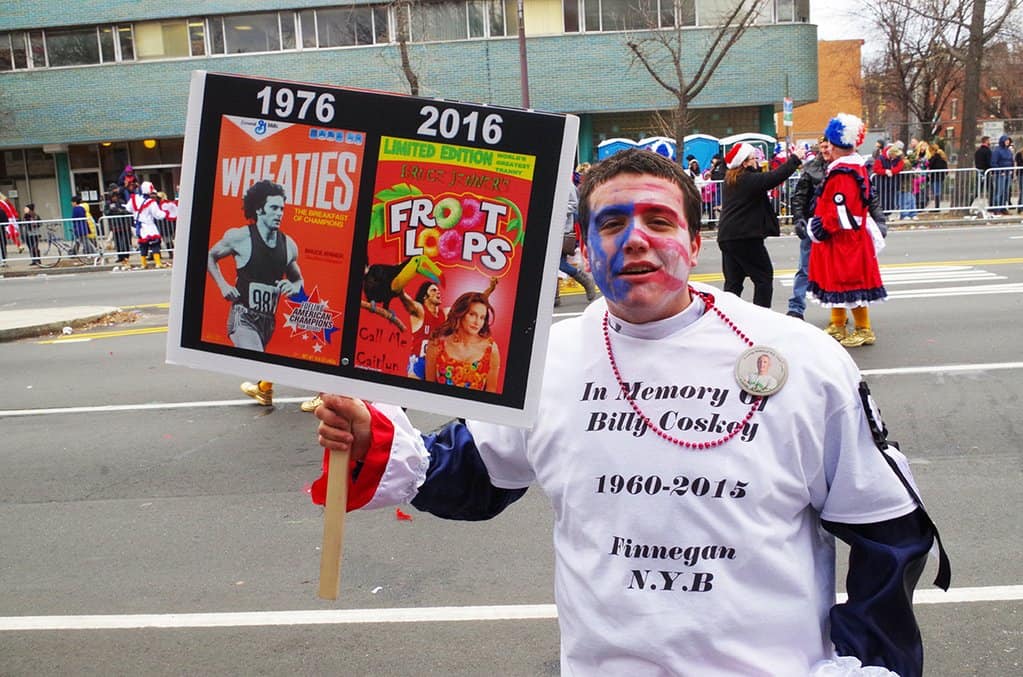 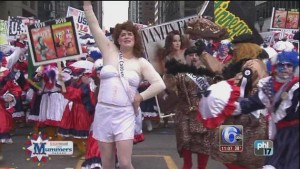 According to WCAU-TV, a man dressed as Bruce Jenner dropped into a wheelchair and changed into a woman’s costume while Aerosmith’s “Dude Looks Like a Lady” played. Members of the brigade also carried signs with images of Jenner on a Wheaties cereal box in 1976 and on a box labeled “Froot Loops” from 2016 (above). One brigade member yelled “fuck the gays” while posing with the sign.

“It’s unacceptable. There’s no place for it in Philadelphia,” said Nellie Fitzpatrick, the city’s Director of LGBT Affairs.

“We will be working to prevent this disgusting display of bias, hateful behavior in the future,” she said. …

NBC10 reached out to Finnegan N.Y.B. for comment about the act and incidents, but didn’t hear back directly. On Twitter, the group said one member doesn’t speak for the entire group.

“What a joke. Everyone is to sensitive. This is why we’re in the comics,” another tweet said.

Philadelphia Mayor Jim Kenney took to Twitter to condemn the Jenner entry as “bad” and “hurtful,” saying transgender citizens “don’t deserve this type of satire/insult.” The Finnegan NYB group later tweeted a pseudo-apology, saying it had “dealt with” the member who yelled “fuck the gays” without addressing the Jenner issue.

@Anthony19145 @phl17 It was bad. Hurtful tomany Philadelphians. Our Trans Citizens do not deserve this type of satire/insult. #Berespectful

One bad apple and blame the whole group. Typical of people out there. THAT individual has been dealt with in house. #LoveGays #HappyNewYear 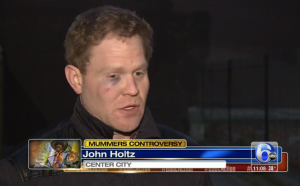 In another incident, 28-year-old John Holtz said he was walking his mother’s dog with friends when he noticed a group of intoxicated Mummers in face paint and costumes, urinating in an alley. From Philly.com:

Holtz said he calmly walked over to the man to ask him to “cool it” and as he did so, another guy in the group of Mummers “clocked” him in the face.
A short brawl then broke out between Holtz and his friends and the group of Mummers. After the fight, the Mummers ran away into the crowd, Holtz said.

Holtz chose not to file a police report because his friends were visiting from out of town and he didn’t want to spend the day in a police station.

“It was not a fun event and it makes me a little concerned about what this actually brings to the city,” he told Philly.com. “It’s positive in certain aspects but it lets some people run wild and free from the law and acceptable social norms.”

According PhillyVoice.com, the Mummers Parade made an effort to be more ethnically diverse this year after the mostly white male event was accused of racism. But apparently it didn’t work, as participants from one entry called “Siesta Fiesta” appeared in brownface, while others carried “Mummers Lives Matter” signs.

The city’s Human Relations Commission released a statement following the parade saying, “More needs to be done to end these public displays of bigotry.”

Watch news reports and a video of the Finnegan NYB entry below.