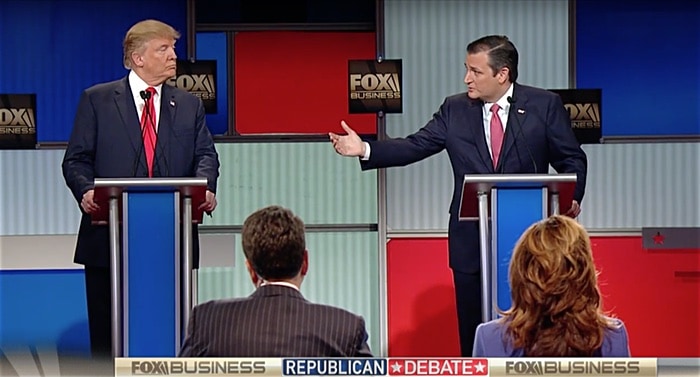 Donald Trump and Ted Cruz had it out in two big exchanges at last night’s Republican debate on FOX Business channel. The first testy exchange came as Neil Cavuto asked about something Trump has been pushing out there for weeks: that Ted Cruz is ineligible for the presidency because he is not a “natural-born” citizen but a “naturalized” one.

They later clashed over remarks Cruz made earlier in the week about “New York Values”.

“Listen, there are many, many wonderful, wonderful working men and women in the state of New York. But everyone understands that the values in New York City are socially liberal or pro-abortion or pro- gay-marriage, focus around money and the media. And — and I would note indeed, the reason I said that is I was asked — my friend Donald has taken to it as (ph) advance playing Bruce Springsteen’s “Born in the USA”, and I was asked what I thought of that. And I said, “well, if he wanted to play a song, maybe he could play, ‘New York, New York’?” And — and — you know, the concept of New York values is not that complicated to figure out.”

Cruz then added that “Not a lot of conservatives come out of Manhattan.”

“So conservatives actually do come out of Manhattan, including William F. Buckley and others, just so you understand.

“And just so — if I could, because he insulted a lot of people. I’ve had more calls on that statement that Ted made — New York is a great place. It’s got great people, it’s got loving people, wonderful people. When the World Trade Center came down, I saw something that no place on Earth could have handled more beautifully, more humanely than New York. You had two one hundred…… you had two 110-story buildings come crashing down. I saw them come down. Thousands of people killed, and the cleanup started the next day, and it was the most horrific cleanup, probably in the history of doing this, and in construction. I was down there, and I’ve never seen anything like it.