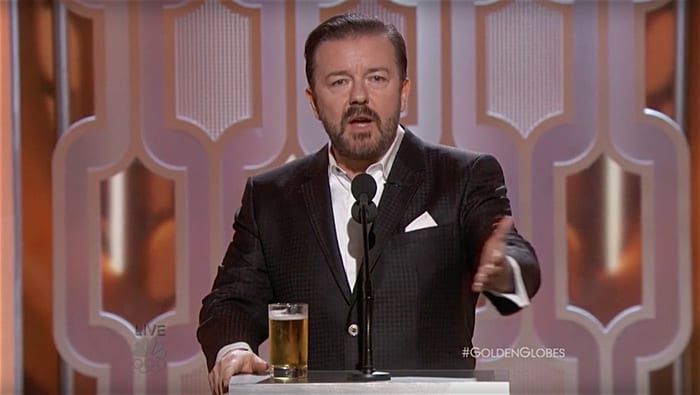 Ricky Gervais promised to be “nice” as host of the Golden Globes but he quickly broke all his promises, taking stabs at NBC, Caitlyn Jenner’s car accident, Jeffrey Tambor’s testicle-tucking, studio bribes, the Catholic church, Roman Polanski, Jennifer Lawrence, Tina Fey and Amy Poehler, Matt Damon, female remakes and the wage gap, and the Golden Globes themselves, suggesting that he sticks his where the sun doesn’t shine.

“Remember that no one cares about that award as much as you do. Don’t get emotional it’s embarrassing. That a award is, no offense, worthless. It’s a bit of metal that some nice, old confused journalists wanted to give you in person so they could meet you and have a selfie with you. Okay? That’s all it is. I’ve got three Golden Globes myself. One’s a doorstop. One I use to hit burglars with. And one I keep by the bed to…doesn’t matter why…it’s mine, it’s mine. I won it fair and square. It’s just the right shape and size. And just to be clear, that was a joke about me shoving Golden Globes, that I’ve won, up my ass.”

Gervais later had a memorably combative exchange with Mel Gibson, reappearing on stage to ask him (the bleeped portion), “What the f–k does sugar tits even mean?”