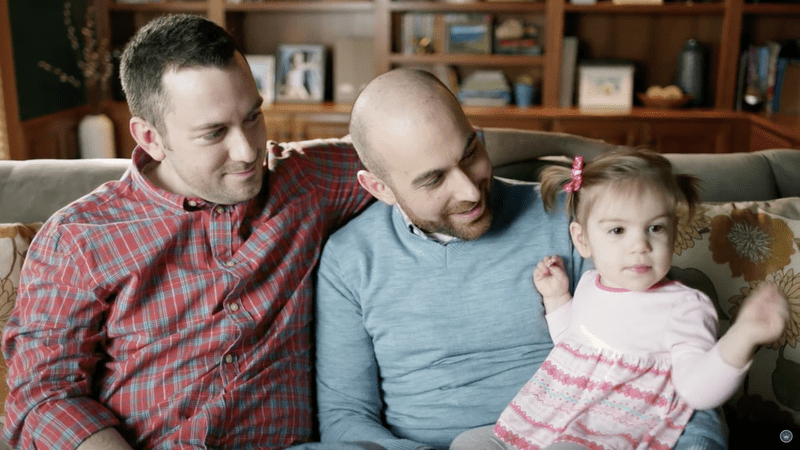 Two gay dads share their story of how they fell in love at first sight in a new Valentine’s Day ad from greeting card company Hallmark.

Hallmark shared two videos of dads Robin and Jason on YouTube as part of their #CareEnough ad campaign: a short 15-second spot in which the two dads share a kiss and another longer video (a little over one minute) in which they talk about getting to live out their dream of becoming dads. “We’ve always wanted a baby,” Robin says in that video, “but as two men it was a complicated difficult process.” The two say that having a baby together brought them closer together as a family.

Robin also shares what Jason wrote to him in his Valentine’s Day card. You may want to have tissues ready. Writes Jason, “Within moments of meeting each other we felt we had already known each other for years. Looking back it must have been because I was meeting my best friend and soulmate. Thank you for convincing me that love at first sight truly does exist.”

Get to know Robin and Jason, below:

Hallmark also created videos featuring a lesbian couple, LaParis and Karisia, as part of their Valentine’s Day campaign. LaParis wrote to Karisia for Valentine’s Day, “Of all the people and all the places in the whole wide planet you are the one for me.”

Hallmark first introduces same-sex couples in its advertising in January 2015. They also created a moving ad featuring a mom and her transgender son this past April that gained significant attention online.

RELATED – A Mother’s Unconditional Love for Her Transgender Son is 90 Seconds of Amazing from Hallmark: VIDEO