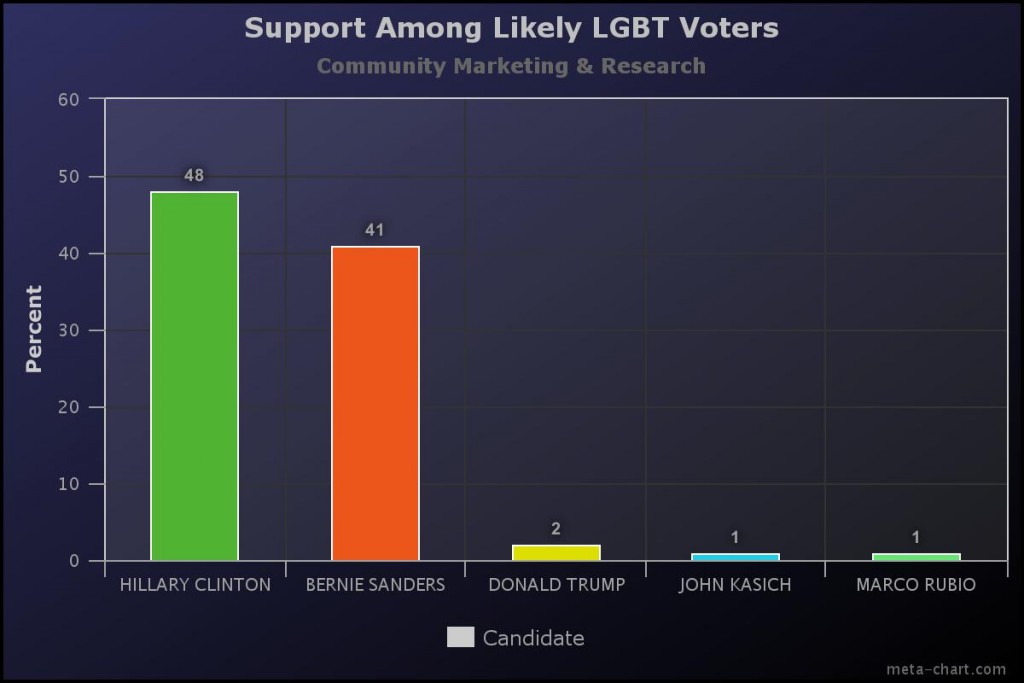 Former Secretary of State Hillary Clinton tops a new survey of likely LGBT voters, although fellow Democrat and Vermont Sen. Bernie Sanders is viewed as the candidate who would be most supportive of equality, according to Community Marketing & Insights.

Forty-eight percent of the 563 likely voters surveyed said they would support Clinton if the election were held today, followed by Sanders at 41 percent.

Businessman Donald Trump led the Republican field among LGBT voters, with just 2 percent, followed by Gov. John Kasich and Sen. Marco Rubio with 1 percent each. Four percent said they were undecided, and all other candidates received less than 1 percent each.

“What is striking in this research is how little support the current group of Republican candidates have among the LGBT community in the 2016 presidential elections,” said David Paisley, Senior Research Director at Community Marketing & Insights. “Unless something changes, the party may largely forfeit about 5 percent of adults in the United States to the Democrats, which can cause important swings in tight elections. Republicans perhaps could connect with LGBTs on issue like the economy, taxation and influence of government in private lives, but instead have chosen policies not supportive of LGBT Americans.”

When asked which Republican is most supportive of LGBT rights, 73 percent said none is supportive, while 6 percent said Kasich and 4 percent said Trump. All of the remaining candidates received 2 percent or less.

The survey was conducted Feb 7-10 and included voters in 46 states. More from Community Marketing & Insights, which conducted the survey:

Participants were asked, “When choosing a President, how important is it to you that the candidate shares the following views on important issues facing Americans today?” Of the 18 issues presented, civil rights issues were in the top categories:

• 96% of LGBTs indicated that “addressing racism/racial inequality in the U.S.” was very or somewhat important.

• These civil rights issues were equally important as improving the economy at 98% importance.

However, conservative issues garnered little support among the LGBT community:

• 89% indicated that “reducing or eliminating abortions” is not an important view of their preferred candidate, or is a view they disagree with.

• 87% indicated that “repealing the Affordable Care Act/Obamacare” is not an important view of their preferred candidate, or is a view they disagree with.

• 72% indicated that “protecting gun ownership rights” is not an important view of their preferred candidate, or is a view they disagree with.

• 59% indicated that “stopping illegal immigration to the U.S.” is not an important view of their preferred candidate, or is a view they disagree with.

Previous Post: « Marco Rubio Wants to be the Most Anti-Gay Republican Candidate Left Standing: VIDEO
Next Post: This New ‘Games of Thrones’ Teaser Might Dash Your Hopes About Jon Snow’s Fate – WATCH »