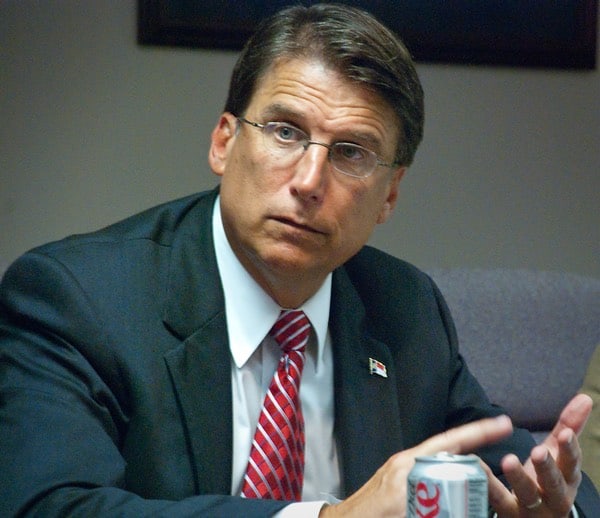 Charlotte’s city council is voting on the law today. According to local reports, 8 out of the 11 members on the council are in favor of the law. With the bill looking likely to pass, McCrory denounced what he called an overhaul of “long established values and norms.” McCrory’s main objection to the proposed law is that it would allow transgender people to use bathrooms in accordance with their gender identity. In other words, the trans bathroom myth has struck again.

“It is not only the citizens of Charlotte that will be impacted by changing basic restroom and locker room norms but also citizens from across our state and nation who visit and work in Charlotte,” McCrory said in an email to the council’s two Republicans, Ed Driggs and Kenny Smith. “This shift in policy could also create major public safety issues by putting citizens in possible danger from deviant actions by individuals taking improper advantage of a bad policy.”

McCrory, a Republican, continued: “Also, this action of allowing a person with male anatomy, for example, to use a female restroom or locker room will most likely cause immediate State legislative intervention which I would support as governor.”

The proposed bill was defeated last year by a 6 to 5 vote. Significant, the law would not protect LGBT residents in Charlotte from workplace discrimination:

The proposal would give LGBT residents some legal protections in places of public accommodation, including bars, hotels, stores and restaurants. It would also give transgender residents the ability to use either a men’s or women’s restroom.

The ordinance wouldn’t affect employment. A business could refuse to hire someone for being gay. If that same person were denied service because of sexual orientation, it would be a violation of the proposed ordinance.

In his email, McCrory said the issue is too important to ignore.

“Although I have made a point as the former 14 year Mayor and current Governor to stay out of specific issues being voted on by the Charlotte City Council, the item of changing basic long-established values and norms of access to public restrooms is misguided and has major statewide ramifications,” McCrory wrote.