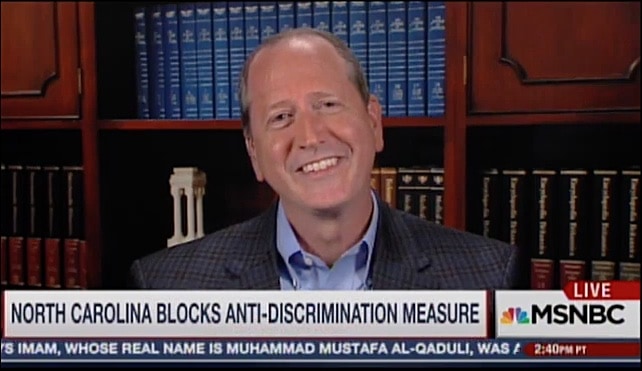 Rep. Dan Bishop, the co-sponsor of HB2, the heinous anti-LGBT law that passed this week in North Carolina, banning all LGBT ordinances statewide, joined Chuck Todd and blatantly lied for 10 minutes about the reasons for and repercussions of the draconian bill, which not only overturned Charlotte’s LGBT ordinance, but banned all LGBT nondiscrimination ordinances statewide and also prohibited local municipalities from setting the minimum wage higher than the state.

The law was passed in a rushed special session that cost taxpayers $42,000 using a campaign of fear that raised the nonexistent specter of transgender predators in public restrooms.

Bishop claims that the law was inspired by “thousands and thousands of complaints” about the transgender bathroom issue:

“What we did was restore common sense, and we did it on a statewide basis.” 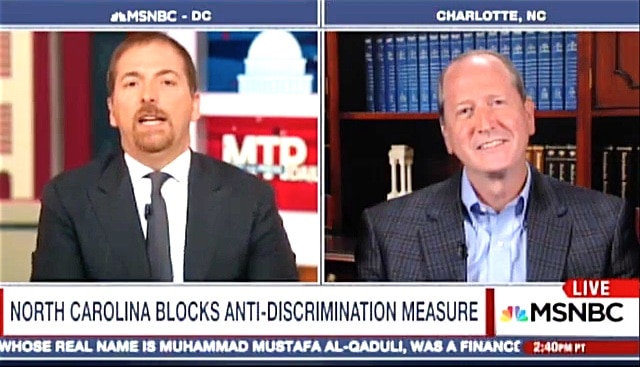 “Absolutely not. In fact we worked very hard. The reason the bill is such a piece of architecture is that we worked very hard to preserve every piece of protection that North Carolina law or Charlotte law provided before the city council went off the cliff and opened up women’s bathrooms to men.”

Todd adds: “There are some gay and lesbian advocates who believe this transgender bathroom issue is being used as a way to roll back protections that were there for gays and lesbians.”

“Those who would dishonestly attack this law, the problem for them is they want to carry the argument that men should go into bathrooms and locker rooms with girls and women. That’s an impossible burden for them to bear so they’re just dishonest about. But they can point to no protection that’s been rolled back. The protections in Charlotte’s ordinance – we’ve preserved them. In fact they’re broader than federal law, protections in public accommodations against discrimination. And we’ve expanded those statewide. There is nothing that we’ve cut back, nothing at all.”

Watch this disgusting bigot blatantly lie his way through this interview: