Trump On Violent Rhetoric: 'I Don't Think I Should Be Toning It Down' 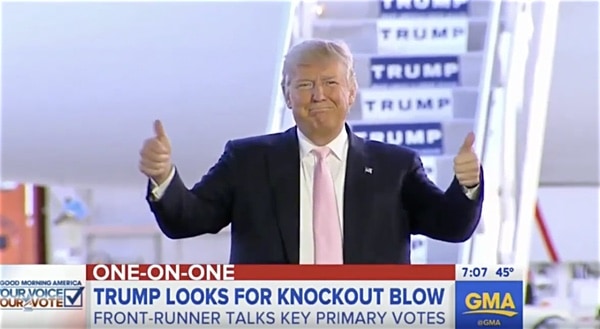 As voters prepare to go to the polls in Ohio, Florida, Illinois, Missouri, and North Carolina today, Donald Trump was asked by George Stephanopoulos on Good Morning America whether the violence at his rallies was out of control and if he is going to be toning down his rhetoric in the next phase of the campaign.

“Well, I don’t think I should be toning it down because I’ve had the biggest rallies probably of anybody ever in terms of primaries and it’s not even a contest. We have had very very little difficulty.”

“I haven’t looked at it yet. I don’t condone violence; maybe that’s why I wouldn’t [pay the legal fees]. Nobody has asked me for fees and I haven’t even seen it, so I never said I would.”

Asked if he’s ready for a contested convention, Trump responded: “Well I don’t know. I mean, we’re going to have to see how we do today.”

Previous Post: « ‘Sausage Party’ Might Be the Most Twisted Film About Food of All Time: TRAILER
Next Post: Lupita Nyong’o Is a Marvel in ‘Eclipsed’ on Broadway: REVIEW »