You are here: Home / PIC OF THE DAY: Air Force One Shielded By Double Rainbow Force Field in Austin 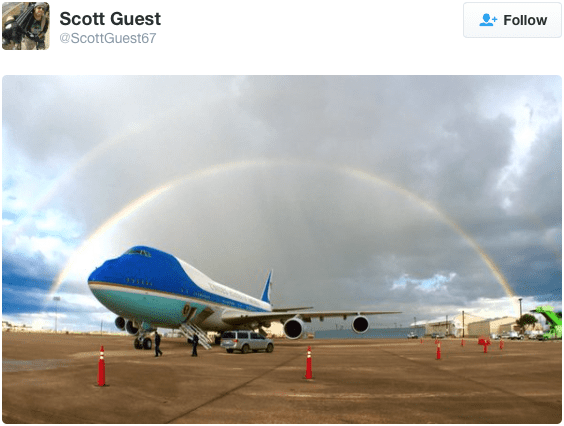 Scott Guest, a photographer for KVUE-TV, captured the above shot of Air Force One in Austin on Friday.

“Secret Service agent yelled at me, ‘Follow me!’ Took me out to the front of Air Force One to capture this double rainbow shot,” Guest wrote on Facebook.

President Barack Obama was in Austin to speak at SXSW, where he made an appeal for help from the tech industry, according to The Texas Observer:

His message: a call to action for “talent” in the private and nonprofit sectors to cooperate with government to “solve some of the big problems we’re facing today,” on everything from civic engagement to national security.

“It’s dangerous if the government gets in the business of propaganda,” he said, but proposed putting tech-minded professionals together to “figure out how we can reach young people who might be vulnerable to extremist messages. You tell us based on the analytics, the data, the algorithms you use on a day-to-day basis to sell products, what is it that’s going to really penetrate here? How can we amplify powerful stories that are already taking place so that they can reach as many people as possible?” …

“I expect you,” he said “to step up because the country needs you. If the brainpower and talent that’s on display today and throughout the conference takes up that baton, then I’m going to be really confident about the future of this country.”

Watch Obama’s keynote, as well as KVUE’s report, below.