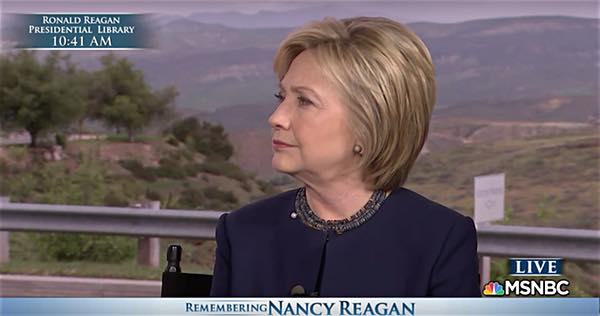 Hillary Clinton has apologized for remarks she made prior to Nancy Reagan’s funeral on Friday praising both Mrs. Reagan and her husband for starting “a national conversation” on HIV/AIDS.

“And because of both President and Mrs. Reagan–in particular Mrs. Reagan–we started a national conversation when before nobody would talk about it, nobody wanted to do anything about it. And you know that too is something that I really appreciate with her very effective, low-key advocacy but it penetrated the public conscience. And people began to say, ‘Hey, we have to do something about this too.’”

Clinton took to Twitter to apologize for those remarks, writing, “While the Reagans were strong advocates for stem cell research and finding a cure for Alzheimer’s disease, I misspoke about their record on HIV and AIDS. For that, I’m sorry.”

Hillary Clinton’s statement on her comments about the Reagans' record on HIV and AIDS: pic.twitter.com/RtIs0zpJfk

Clinton was lambasted by many LGBT advocates and activists for her remarks which seemed to ignore the blind eye the Reagans turned to the HIV/AIDS crisis during their tenure in the White House, to say nothing of Mrs. Reagan’s refusing to help her friend Rock Hudson receive potentially life-saving treatment as he fought AIDS.