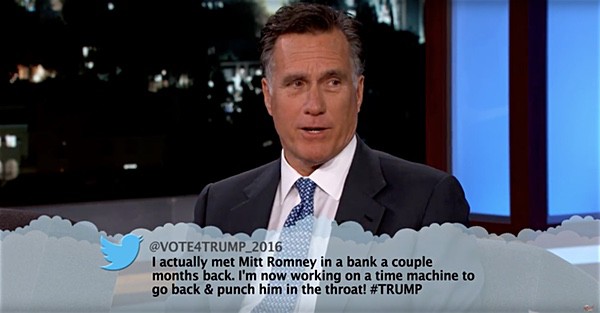 Mitt Romney, or as one commenter notes, “the establishment suicide bomber,” made a stop by Jimmy Kimmel last night to push his anti-Trump crusade forward. His comedy chops have not improved since 2012.

Romney explained why he doesn’t want Trump to be the nominee. He says he did it for his grandkids:

Romney was also asked who he’d vote for if he had to vote for one of the candidates, and what he thinks of Bernie Sanders.

Romney says one of the four Republicans will be the nominee and also notes there have been ten contested conventions in history. “1948 was the last time that happened.”