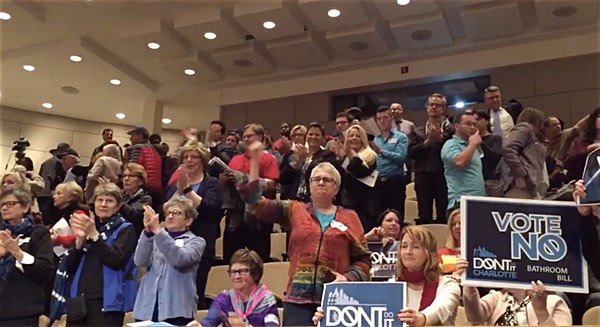 North Carolina Republican lawmakers are convening a special session on Wednesday to vote on an extreme measure that would void the LGBT protections recently passed in Charlotte, and might prevent other municipalities from passing similar ordinances.

The Charlotte City Council passed the protections in a 7-4 vote in February after rejecting them the year prior. 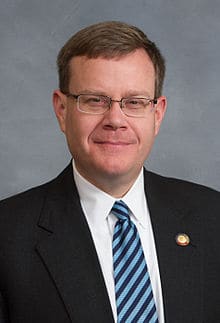 Lt. Gov. Dan Forest, who oversees the Senate, and House Speaker Tim Moore (pictured, right) invoked a rare constitutional provision to call the session after Governor Pat McCrory declined to do so. McCrory, who opposes the LGBT protections, and vowed to overturn them shortly after their passage, said in late February that he opposed a special session because it was too costly to taxpayers.

The special session will cost taxpayers $42,000 a day, according to the Charlotte Observer:

Shortly after the ordinance passed, Moore of Kings Mountain, pledged that lawmakers would do what was necessary “to correct this radical course.”

McCrory said he wanted lawmakers to wait until the legislature reconvened on April 25 and expressed concern through a spokesman that “the proposal being considered goes beyond the scope of the bathroom issue and includes unrelated subject areas” adding that “Anything above and beyond the bathroom (issue) … should be dealt with during the full legislative session.”

However, Charlotte’s ordinance is set to take effect on April 1, and it’s apparently so evil to Republicans that they want to head it off:

“There seems to be a concern among our members that we need to deal with this prior to the effective date,” he told the Observer.

The city’s existing nondiscrimination ordinance covers race, age, gender and religion, among other characteristics. It covers places of public accommodation, such as stores, restaurants and hotels, as well as taxicabs and limousines.

When the new ordinance takes effect, a baker would no longer be able to refuse to bake a cake for a gay wedding. Other vendors would have to cater LGBT events, even if it is against their religious beliefs. The city couldn’t revoke a business license if someone violated the ordinance. But it could seek an injunction that would force a business to comply.

“It is absolutely shameful that North Carolina lawmakers are going to waste taxpayer dollars trying to strip local control from the city of Charlotte and its citizens. Worse yet, they’re doing so to advance discrimination and put North Carolina on the wrong side of history. The people of Charlotte elected a pro-equality mayor and a pro-equality majority to the City Council. Those leaders decided that it was in the best interest of Charlotte to provide local protections for the residents and visitors in their community.  This attempt to strip away local control from Charlotte is a slap in the face to the people of Charlotte and the democratic process. We urge all fair-minded North Carolinians to let their elected officials know that they should stay out of Charlotte’s business and focus on the real issues that voters all across the state actually care about.”

“Tonight the North Carolina General Assembly has let us know loud and clear that it does not understand the priorities of North Carolina. Speaker Moore and Senator Berger have said that they will come back into session later this week to consider legislation which would overturn non-discrimination protections across the state. This special session will cost $42,000 per day — more than the average starting salary for a teacher in North Carolina. That waste of taxpayer money is negligent. 200+ cities across the country including Myrtle Beach and Columbia, South Carolina, have already enacted protections which mirror Charlotte. In none of these cities have these protections created a public safety risk, to indicate otherwise is a lie. This is an act of political theatre and at this point Governor McCrory must stand up and be what we expect from an executive and reject any legislation that comes out of this special session.”

Previous Post: « Jake Gyllenhaal and Jimmy Fallon Spit Food All Over Each Other: WATCH
Next Post: When’s The Last Time You Had ‘Tough Love’ Like This? – WATCH »