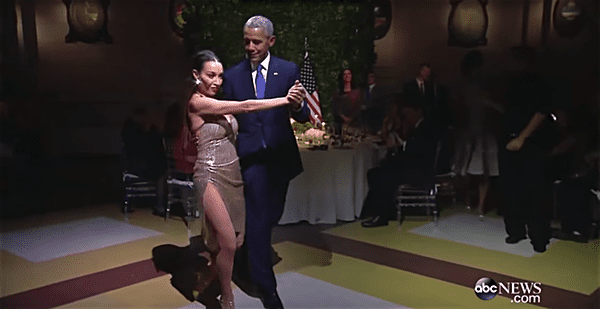 While attending a state dinner in Buenos Aires, Argentina, President and Mrs. Obama danced the tango–albeit with separate partners.

Argentina is the home of the tango, of course, and President Obama apparently obliged when asked to dance.

Looking relaxed practicing a few steps with dancer Mora Godoy, while his wife First Lady Michelle Obama gave it a whirl with dancer Jose Lugones, the Obamas held their own on tango’s home turf.

The US president “was telling me he didn’t know how to dance (tango)”, Godoy said. “I told him ‘just follow me’.”

“He said ‘OK’, and then he started to dance. Then I started following his lead because he is a very good dancer,” Godoy told the La Nacion daily.

While The Associated Press reports Obama initially declined the dancer’s outstretched hand — multiple times — he then relented and joined her on the floor, dancing for about about a minute to the dramatic tango music. […]

Nearby, first lady Michelle Obama tangoed with another dancer. After the dance ended, she and the president’s partner exchanged a few words and smiles.

Dancer assures Mrs Obama the dance with the president was just a dance. pic.twitter.com/tVW0gCKORE

Dancer who tangoed with Pres Obama – gets a hug from Mrs. Obama. pic.twitter.com/G198K3F5jx

Also, the song that was being played was apparently the same one played during Al Pacino’s famous tango scene in “Scent of a Woman.”

Thought I recognized the music: Por una Cabeza. From the Al Pacino tango scene in "Scent of a Woman." pic.twitter.com/DIpB4b25D2

Watch video of the Obamas dance the tango, below.