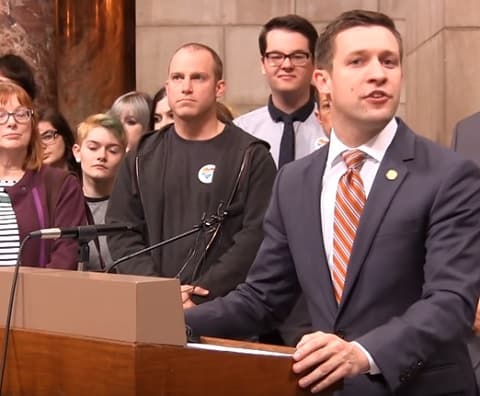 The devastating blow for gay rights in Nebraska happened on Wednesday, the same day the North Carolina Senate voted to ban all cities in the state from enacting LGBT nondiscrimination ordinances. The NC ban also voids all current LGBT rights ordinances on the books in North Carolina, such as the recently passed measure in Charlotte.

Just opened on LB 586 which would prohibit #LGBT discrimination in the workplace! #neleg @ACLUofNE @HRC pic.twitter.com/5hOJHgJIo8

Nebraska Senator Adam Morfeld (above), who introduced the bill, has said that although his measure also lacked enough support to pass last year, he will continue to introduce it as long as he is in office. “We need to create an environment, colleagues, that protects people and who they are, but also sends a message that Nebraska has modern human rights protections and we’re open for business,” he said.

“I think my colleagues see a hateful person behind every tree, behind every cross. They think every church-goer is hateful. I don’t think people should conform to a government-mandated moral code.”

According to KETV Omaha, supporters of the nondiscrimination bill say Nebraska cannot draw talent to the state’s workforce without such protections.

“Each day Nebraska goes without basic updates to our nondiscrimination law is a day when our state stands to lose talented employees who contribute to our state’s economy.

“We urge any Nebraskan who has been discriminated against to contact us as we continue to explore legal and policy options to ensure no Nebraskan is fired because of who they are or who they love. We will never give up this fight.”

Last month, a federal judge in Nebraska issued a permanent injunction against the state’s ban on gay marriage.