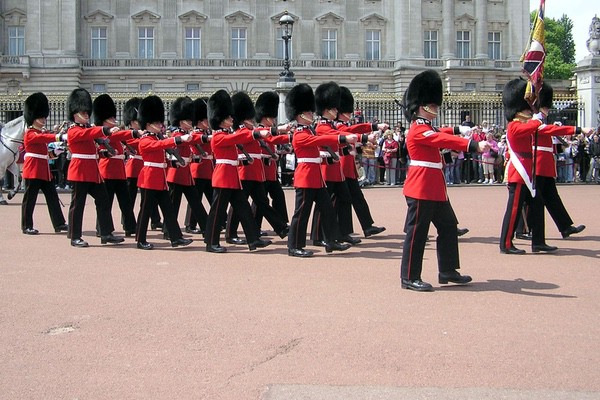 Two new recruits of the British army regiment known as the Queen’s Guard were forced to rape each other while their superiors video-taped the horrific initiation ceremony.

The Queen’s Guard have become iconic because of their distinguishable uniforms and their job of guarding HM the Queen and Buckingham Palace.

British tabloid The Sun broke news of a probe into the rapes that took place last September after the new recruits, 23 and 28 respectively, had completed 7 months of training and just completed their first ceremonial duty at the Tower of London.

After returning from that duty, the recruits were told to shower and then join their comrades to watch a rugby match. After the game ended, the evening took what The Sun calls “a sinister turn”:

The Sun on Sunday understands the new recruits were ordered to strip and warned they would be mercilessly bullied if they did not.

They were then allegedly forced to carry out sex acts on each other too disgusting to describe in detail.

What happens on the footage is disgusting.

“It was totally out of control and the older and more senior guys were obviously ordering them to do what they did.

“The two guys must both have been terrified.

“They had no choice in what they were doing, it was bullying at its absolute worst. People should be in jail for this.”

Video of the incident was then shared around by the victims’ fellow guardsmen via email, WhatsApp, SnapChat and Facebook. Said The Sun’s source: “The footage had spread like wildfire. Everyone was on their phones and pointing out the blokes it had happened to.They were mocked for being gay, although they were forced into the acts. It was horrific and worse than anything I have ever known in the Army.”

A senior official became aware of the video and told the victims he was launching an investigation. Said the unnamed source, “The RSM [Regimental Sergeant Mahor] was rightly horrified and I think he apologised to the guys. The Military Police got involved and it was reported to them as a rape as there were guys there that could have stopped it but didn’t.”

As far as what action has been taken since, 6 soldiers have reportedly been punished and the Surrey Police have launched their own investigation. No word yet on what that punishment was.

One of the victims remains with the battalion and has reportedly been the target of additional bullying. The other has gone AWOL and is expected to be discharged from the Army.

Said an Army spokesman, “We can confirm an incident did take place and details were referred to the Royal Military Police for an initial investigation. No allegations of coercive or criminal behaviour were made. However this behaviour is unacceptable and administrative action was taken against those present, with disciplinary measures taken against one individual.”