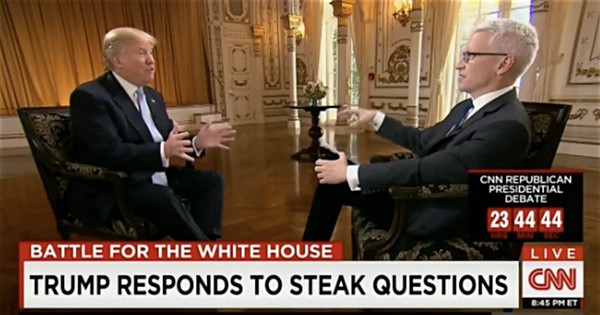 Anderson Cooper grilled (har, har) Donald Trump about the business items (wine, water, magazines, and meat) he trotted out at a press conference on Tuesday night, asking him about the authenticity of those steaks he claimed were his.

The display seemed to be a response to Mitt Romney’s attacks on Trump and his failed businesses.

But people noticed some things about the steaks:

Close up of the "Trump Steaks." Does that say Bush Brothers? There's a Bush Brothers in WPB https://t.co/hhdMzBTBrJ pic.twitter.com/Ro3BiwwXkC

So Anderson asked Trump about that. He also asked him about the magazines. Trump says he just creates one when he needs to.

But apparently Anderson just doesn’t get how business works.