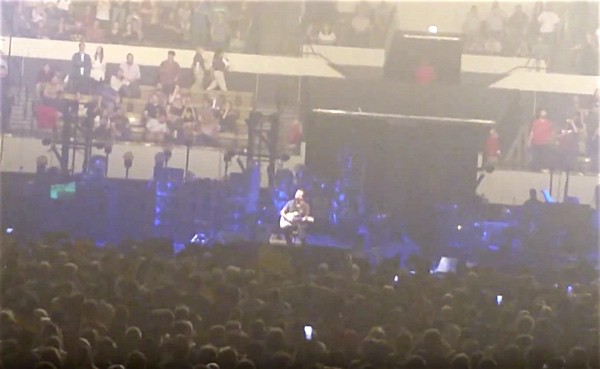 Vedder also dedicated the group’s song “I Am a Patriot” to “all the soldiers in the LGBT community.”

When Vedder initially told the crowd about the cancellation there were some boos in the audience, so he went on and explained:

“Because they’ve got a law there that broadly discriminates against a whole group of people. I can’t tell from here if you’re booing North Carolina, if you’re booing us for having to decide that we’re not going to play there, I can understand that too.”

“It was a hard process because we thought we could still play and make things right, that we could fortify all the people on the ground working to repeal this despicable law. We thought we could take the money and give it to them and still play the show. But the reality is there is nothing like the immense power of boycotting…but it could be the way that ultimately is going to effect change. So again we just couldn’t find it in ourselves in good conscience to cross a picket line.

“So tonight we play this one for all the soldiers in the LGBT community.”

The band then launched into their track, “I Am a Patriot”.