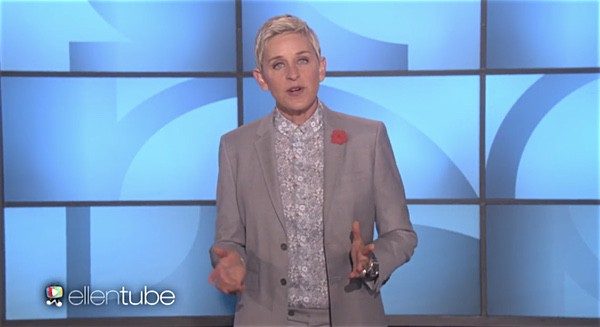 Ellen DeGeneres used the opening monologue of her show today to rip Mississippi a new one, blasting the anti-LGBT situation there with comedy to make a point about discrimination.

“I don’t know what Mr. Sippy is doing but I’m very worried about Mississippi,” she began. “I’m not a political person, I’m really not. But this is not politics, this is human rights. And when I see something wrong I have to talk about it….so this issue is very personal to me. First of all, Mississippi is the only state I know how to spell. Second of all, that is the definition of discrimination. It is also something that the Supreme Court already ruled on when they made marriage a right for everyone. Everyone.”

“The Supreme Court said the same thing that Diana Ross and the Supremes said a long time ago: Stop in the name of love. And now Mississippi is saying, I don’t second that emotion.”

She then used a metaphor to describe what should happen:

“Imagine this. Two cupcakes walk into a flower shop and they want to buy a dozen roses. But the florist doesn’t believe in selling flowers to cupcakes because they don’t have any money. But gay people do, so sell them the damn flowers!”

Ellen then told LGBT people who live in states where discrimination is happening not to give up hope:

“If you’re in Mississippi or North Carolina or anywhere and you’re saddened by the fact that people are judging you based on who you love, don’t lose hope. I was fired for being gay. And I know what it feels like. I lost everything. But look at me now.”

“I could buy that governor’s mansion, flip it, and make a seven million dollar profit.”