The Huntsman: Winter’s War, now playing, promises a “new” fairy tale. That’s true only if you’re willing to stretch the definition of the word. This “new” and awkwardly titled picture is both prequel and sequel to Snow White with some Frozen fan fiction in the middle.

It begins long before the events of the revisionist Snow White & The Huntsman (2012) and eventually skips ahead to pick up where the last movie left off. In case you’ve forgotten your blockbuster history — spoiler alert! — Snow White and her Huntsman (Chris Hemsworth) triumphed at the end by killing the true twin stars of the picture: Queen Ravenna and Her Oscar Nominated Costumes (a.k.a. former Oscar winners Charlize Theron & Colleen Atwood).

Dead though Ravenna was, when there is money to be made in franchise resurrection, nobody stays buried. In the new film we learn that the royal witch came to power alongside her kind loving sister Freya (Emily Blunt). After an unspeakable tragedy, though, Freya also became evil.

Ravenna had that Magic Mirror to inspire her wickedness but Freya opts for a worn Blu-ray of Frozen as unholy talisman, constructing an isolated ice castle in the mountains, causing perpetual winter over nearby Arendelle (the cities are unnamed but it’s a solid guess) and freezing her sister out of her life. She stops short of musical numbers which is a pity because have you heard Emily Blunt sing? 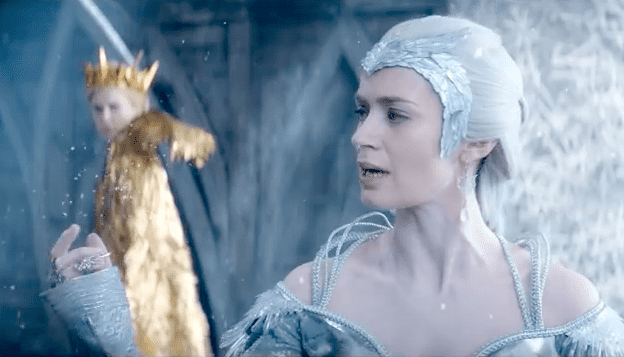 Snow White is spoken of often but only appears once in an ill advised cutaway where we watch an uncredited Kristen Stewart body double staring into that Magic Mirror. Oh, movie… sigh… No!  It’s best NOT to remind us that the star of the original picture is missing else we suspect the new chapter is an empty cash grab.

For Winter’s War we focus on The Huntsman and his coworker/wife Sara (Jessica Chastain) who also happens to be a Huntsman. Chastain & Hemsworth have a few good moments, but Chastain takes the part a bit too seriously and there’s far too much of both of them when the movie needs its sibling rivalry to soar.

This isn’t a romantic drama, but high fantasy. Perhaps Hemsworth learned from all his time in Thor‘s Asgard to play his scenes lightly else moviegoers reach for phones from boredom; he’s the only element of Winter’s War that improves upon the original film.

Style, in both acting and filmmaking, is so important in genre pictures. The best you can hope for in “new” fairy tales is that they’ll be Grimm-like rather than merely grim. Winter’s War stumbles with that all important distinction. The best children’s fairy tales are actually quite macabre, so it’s hard to object too vehemently to the gruesome story beats involving Queen Freya’s child which set things in motion.

But does the film that follows have to be so otherwise self-important? It’s the great plague of blockbuster Hollywood, this sober myth-making, crushing any possibilities of joy that attempt to peak out from CGI mayhem. Hemsworth tries and there are a few dwarves for comic relief but they bring only half grins rather than real laughs. Mostly the new tale is a slog from set piece to set piece, sparking to life only when two wickedly talented actresses are sharing scenes and secrets.

The movie, alas, is too dumb to realize that this is where the goodies are and gives us very few of those duets. My mind kept racing to Whatever Happened to Baby Jane? (1966) and Death Becomes Her (1992) and not just because I’m gay and this is bound to happen. When two powerhouse actresses playing hateful intimates share the frame in heightened movie genres like horror or fantasy how are we to not expect sparks and grand guignol theatrics and even subversive laughs.

But Winter’s War doesn’t get even a third of the way there. Emily Blunt ably exudes the forced emotional chill of Freya but she errs slightly on the side of emotional realism. As with the 2012 movie, only Charlize is delivering a star turn as big as the picture needs. She knows it needs the gleeful sadistic joy of a Bette Davis kicking a Joan Crawford when she’s down. Theron comes through in the finale with some much needed over the top maliciousness.

She even tries out a solitary wicked cackle but the director (former visual effects man Cedric Nicolas-Troyan) doesn’t appear to be interested, opting for a longshot. He’s happier admiring the visual effects and the costumes (far more belabored and cheaper-looking this time around) than letting Charlize’s vicious beauty and stylization take the wheel.

There is one especially strong visual effect, though. At one point during the movie’s biggest action sequence Queen Ravenna is momentarily caught between the power of her Magic Mirror and her own sister’s attack. That wonderful face registers panic and power simultaneously as the mirror’s gold and her sister’s ice battle it out for dominion, her skin and eyes shifting color with each micro victory and defeat.

It’s a wonderful effect but a movie needs more than eye candy to justify its existence. Fairy tales crave heart as badly as this evil queen once hungered for Snow White’s in a box. This ill-fated sequel can’t find one wherever it looks.