A new poll out from SurveyUSA for Raleigh’s WRAL shows that the anti-LGBT law Governor Pat McCrory signed may be affecting his poll numbers:

The last Survey USA poll conducted on this race showed McCrory with a 2 percentage point lead.

Cooper, of course, has been a vocal opponent of HB2 from the get-go, and has said he won’t defend the law.

With regard to the bill itself:

Today, 38% support the new law, 50% oppose. Support for the law is greatest among strong Republicans, 62%; among very conservative voters, 61%; and among evangelicals, 53%. Opposition to HB2 is greatest among strong Democrats, 72%; very liberal voters, 84%; liberals, 80%; people who almost never attend religious services, 62%; and among voters who say they know someone who is transgender, 61%. A majority opposes HB2 in greater Charlotte and greater Greensboro, a plurality opposes HB2 in greater Raleigh and in Southern and Coastal NC. 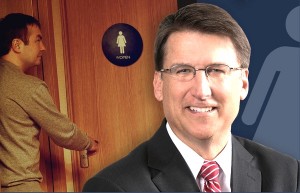 But the numbers also show that North Carolinians have bought into the right-wing trans predator bathroom nonsense:

Despite that, they believe trans people should be protected from discrimination:

Large majorities see how the bill is hurting business in North Carolina.

61% of Tar Heel voters say HB2 has hurt North Carolina’s image nationally. Just 18% say HB2 has helped the state’s image. The same number, 61%, say that HB2 has hurt North Carolina’s ability to attract and keep businesses. Just 11% say the law has helped the state attract and keep businesses, 19% say it has had no impact. At this hour, 37% of voters say the law should be repealed in its entirety, 20% say most of the law should repealed but the bathroom provision should remain in place, 19% say other changes are needed and the smallest group, 18%, say the law should be left in place “as is.”