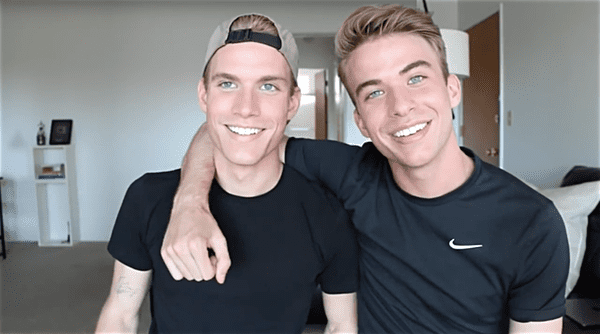 You may remember YouTubers The Rhodes Bros, who in 2015 both came out as gay to their dad in an emotional video that went viral–really viral. As of this posting, it has been viewed over 22 million times.

Now, Austin and Aaron Rhodes are back and answering the question they say they get asked the most: how did they come out to each other?

In their latest video, the twins explain that there wasn’t a defining moment that they each knew the other was gay when they were growing up. However, they both said they experienced being drawn to creative pursuits and preferred Barbies to G.I. Joes. “Not to stereotype!”, Aaron adds.

Still, there was an unspoken agreement not to talk about their sexuality, Austin says. “That was always kind of a taboo subject,” he remembers. “If that ever came up, I always felt really uncomfortable and I think you did too. ”

The thought of both of them having to come out to their family terrified Aaron. For his part, Austin felt he would never come out.

Finally, when the twins were in high school, Aaron started dating a boy and decided to come out to his brother. The pair were both working at Hollister one Sunday and when they went out to eat after their shift, Aaron opened up to his brother.

“So obviously I’m gay and I’m dating a guy and I want you to know about it,” he told him. But then he says, “it got kind of awkward and Austin got quite and he looked at me and he said–”

“Then we both just sat there…I’ll never forget it because we finally caught up to each other,” Aaron recalls.

“We could finally be 100% ourselves in front of each other,” Austin adds.