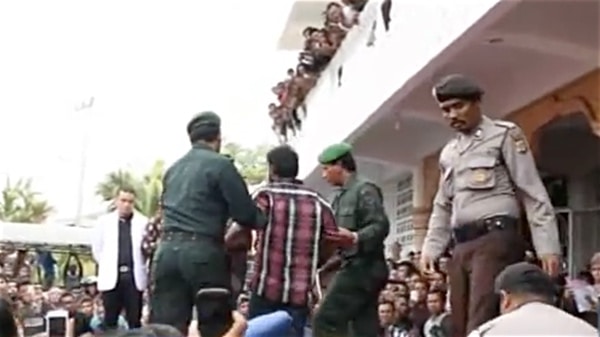 For her crime, violating the tenets of a faith she does not observe, the courts offered two punishments.

Option one: time in a grim jailhouse. Option two: nearly 30 lashes with a cane wielded by a anonymous man, hooded and clad in black robes, as her neighbors watched.

She chose the latter.

Such was the fate of Remita Sinaga, 60, a rare Christian living in Aceh, one of the most stridently Islamic corners of Asia. Her crime: selling bottles of booze on the sly, an illicit act under Aceh’s increasingly hardline enforcement of Sharia, or Islamic law.

Much of Indonesia embraces a version of Islam far more forgiving than the severe strain practiced in hyper-orthodox Persian Gulf countries like Saudi Arabia. In much of the tropical archipelago, beer, rock music and dating is permitted.

But not Aceh, among the the first Southeast Asian regions to receive seafaring Islamic traders in the 13th century. Its people have held fast to the faith ever since. Today, it is the only province in the country that punishes gay sex, boozing and even out-of-wedlock make-out sessions with lashes dealt by a rattan cane.

Aceh is stunningly beautiful, blessed with beaches that are arguably more picturesque than those in Bali, the paradisiacal island that draws in most of Indonesia’s tourists.

But foreign visitors have stayed away for good reason. In 2004, Aceh bore the brunt of the Indian Ocean tsunami that killed more than 230,000 people. Until 2005, it was also wracked for three decades by a grisly guerrilla war for independence.

And today, it is patrolled by religious police who hassle people for petty violations: men wearing shorts, women in tight jeans, unmarried couples holding hands by the sea.

Indonesia’s harsh judicial sentences are well known. A tourist who smokes a joint in Bali can go to prison for years; in 2015, the nation executed eight foreign drug smugglers by firing squad.

But in Aceh, cops regulate vice and virtue. In 2002, the province was granted permission to enforce Sharia law by the national government, which hoped to satiate rebellious locals with the right to govern itself under the Quran.

Like US politicians touting “family values,” Aceh’s leading politicians try to appease their base by promising to shore up morality.

As part of that, they’ve recently promised to target the not-so-pious with more severity and to begin punishing non-Muslims for failing to obey the Quran. They’ve explicitly stated that even foreign tourists delighting in Aceh’s beaches may be lashed 100 times for homosexual acts.

Sinaga is the first non-Muslim to run afoul of this intensified campaign, and the first to be caned for it. She was given the choice to opt instead for a secular punishment: a stint in jail. But even officials admit that Indonesia’s prisons are grisly.

As the head of Aceh’s Sharia department told the Los Angeles Times, Sinaga “didn’t want to spend time in prison because we’re all aware that prison conditions are bad and there’s little welfare there.”

Sinaga’s choice is understandable. Lashings in Aceh are not gruesome. They are designed to wound the pride more than the flesh. Aceh’s former Sharia police chief previously explained to GlobalPost that canings “are not about pain. It’s about humiliation.”

Each blow is dealt by an official, robed in dark cloth from head to toe, who humiliates the accused on a public stage. Crowds are invited to jeer and film beatings with their mobile phones.

Under their neighbors’ gaze, some sentenced to lashings preserve their dignity with acts of defiance. Men convicted of moral crimes — such as gambling — have even tried to snatch away the cane as it flogs their bellies.

Sinaga, however, simply bowed her head. Clad in a lavender-colored hood, she stared at her feet as the flogger landed 28 blows on her back.