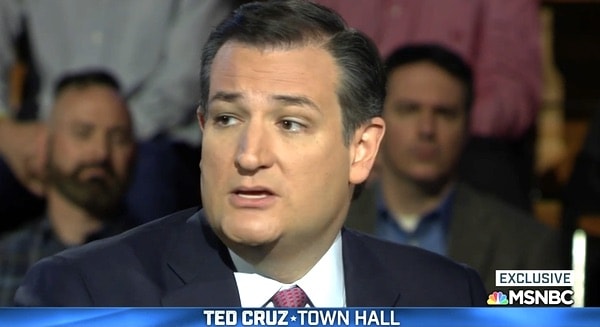 “The political correctness that we have embraced – enough already. Look, the Obama Education Department is going against a junior high insisting that the junior high must allow a teenage boy to shower with teenage girls. Now, that’s just nuts. That’s not a reasonable position. That’s crazy.”

When asked about the corporations boycotting North Carolina, Cruz replied:

“I think big business  gives in to political pressure and has been willing over and over again to trample on religious liberty. One of the saddest things we’ve seen is the retreat of the Democratic Party from religious liberty. It wasn’t too long ago – a couple of decades ago –  religious liberty united us all…When it came to religious liberty – when it came to protecting the rights of faith of Americans – Democrats and Republicans stood united. A couple of decades ago the Religious Freedom Restoration Act, national legislation, passed Congress virtually unanimously. Almost every Democrat voted for it. It was signed into law by a Democrat, Bill clinton. Now unfortunately in the last 20 years the modern Democratic party has gotten so extreme and so radical they’ve decided there’s no room for religious liberty and they are excoriating any one states that pass legislation identical to what they supported.”