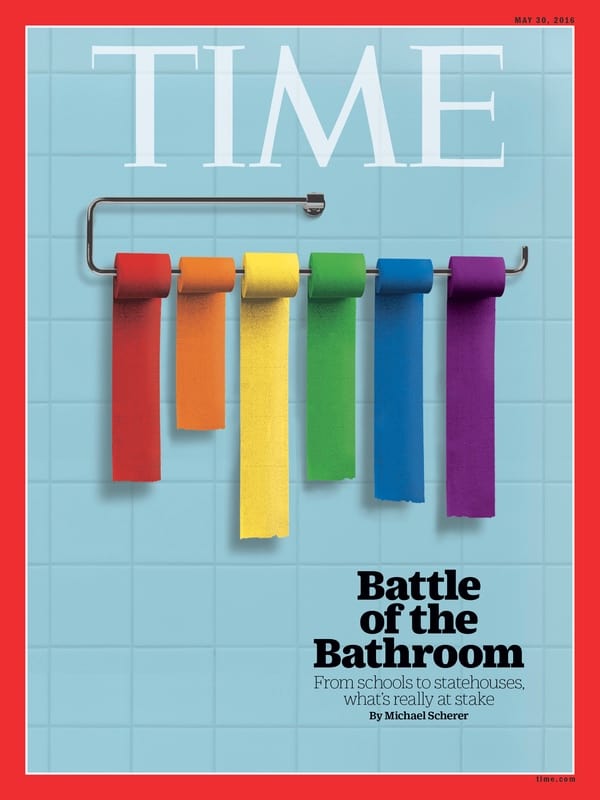 TIME Magazine’s May 30 issue, which hits newsstands tomorrow, features a cover story by Michael Scherer on “The Battle of the Bathroom”.

“In a divided country, the social battle lines have been drawn once again in our most private of public places. State legislatures have been besieged, and school committees have split. Pastors have become politicized in the pulpit, and the gay-rights lobby has abandoned its past hesitancy to embrace the transgender cause. Courtrooms are filling with legal motions that are certain to end up at the Supreme Court. The fight—­political and legal, personal and ­collective—is just getting going….

“Like all great political battles, this one is distinguished by the decision on both sides to commit loudly and completely, to elevate the issue and to force it on the American public…. The 2016 battle over bathrooms is, after all, about far more than public ­facilities—it’s about gender roles, social change, federalism, physical danger, political polarization and, most strikingly, a breakdown in the ability of anyone in this country to speak across our divides, or appeal to common humanity.”

The issue also features interviews with people involved in the bathroom battle, including Judy Chiasson, of the Los Angeles Unified School district, which allowed transgender students to use the bathrooms they identify with since 2005.

Says Chiasson: “I have never had misconduct by a transgender student. A lot of fears people expressed, we have never realized those, we have never seen them. We’ve been doing this for 11 years. It works.”

Also featured are Pastor Irvin “Jack” Cunningham, leader of the 750-active-­member Bible World Church and Russell Moore, the president of the Southern Baptist Convention’s public-policy arm, who, not surprisingly, oppose moves by the Obama administration to allow trans people to use the bathrooms of their choice.