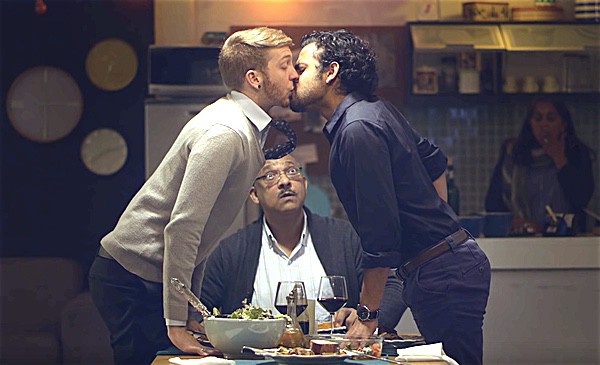 “Kiss”, a spot produced last summer by the Anova Health Institute and Elton Johns AIDS Foundation as part of its We The Brave campaign and the Foxp2 Cape Town advertising agency, hit the airwaves in South Africa in February but we’re just now hearing about the homophobic heads exploding over it.

It has since triggered a litany of complaints, ranging from “this is offensive and disgusting” to “a step too far”, “explain this to my daughter” and “family time” to “inappropriate” and “such an inappropriate ad”.

Several TV channels declined to broadcast the commercial and others in the series that’s been deemed too risque.

The ad also featured a condom being unwrapped.

Channel 24 notes that it proudly supports the ad.

Previous Post: « Sia Surprises Gay Contestant on ‘Survivor’ Finale with Unexpected Gift: WATCH [SPOILERS]
Next Post: LGBT Rights and the ‘Battle of the Bathroom’ hits the Cover of ‘TIME’ »