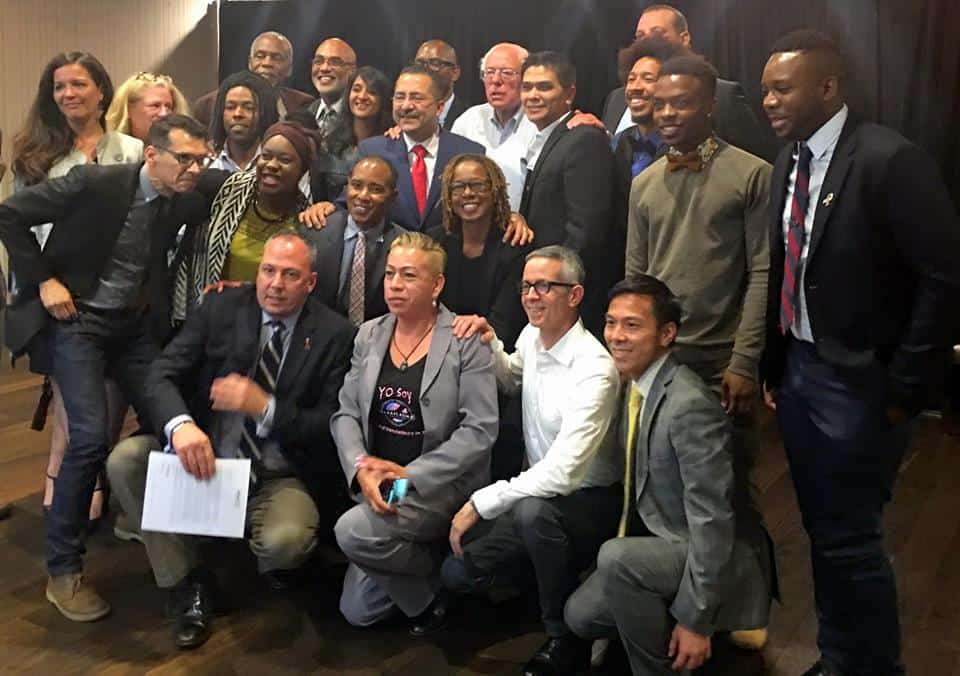 Bernie Sanders met with HIV/AIDS activists on Wednesday and then pissed them off by putting out a press release suggesting that their meeting was about his endorsement of AIDS Healthcare Foundation’s ballot initiative to lower prices for taxpayer-supported AIDS treatments.

Said Sanders in the press release:

U.S. Sen. Bernie Sanders on Wednesday met with national HIV/AIDS advocates to discuss the epidemic and his support for a California ballot initiative to lower prices for taxpayer-supported AIDS treatments.

“Let me thank you for the work you do,” Sanders said at the conclusion of the meeting. “The issues you have raised are enormously important and effect millions of people in this country and more around the world.

“I look forward to continuing to work with you,” the senator added at the meeting hosted by Danny Glover, the activist and actor.

The ballot proposition Sanders supports – the California Drug Price Relief Act – is supported by the AIDS Healthcare Foundation and National Nurses United, both headquartered in Oakland, California. The measure would prohibit the state from paying more for a prescription drug than the lowest price paid for the same drug by the U.S. Department of Veterans Affairs. It would make sure that state taxpayers will no longer be ripped off by pharmaceutical companies that charge exorbitant prices for AIDS treatments and other prescription drugs. “We think it’s a great start and we applaud the people of California for standing up to the pharmaceutical industry,” Sanders said afterward.

At the meeting, Sanders noted that he has introduced a plan to lower costs for HIV/AIDS drugs. His measure would establish a prize fund to provide incentives for drug makers to develop new treatments. Unlike the current system that lets drug makers charge the highest prices in the world for medicine sold in the United States, medical breakthroughs made under the prize fund system would make the new drugs available to the public at affordable prices.

Sanders also agreed to set a national goal of ending the HIV epidemic in the U.S. by the year 2025 so that HIV is no longer a public health threat to any community in the U.S. and that people with HIV are able to live long, healthy lives.

Sanders also has called for expansion of the Ryan White HIV/AIDS program which provides HIV-related services. The senator also promised to push for stronger civil rights protections for people living with the disease.

Activist Peter Staley lashed out on Facebook after the press release went out:

Feeling used and abused by the Sanders campaign right now. They just issued a press release making it sound like our meeting was about his endorsement of AHF’s drug pricing ballot initiative in CA.

Senator Sanders never brought the issue up during our meeting. WE brought it up near the end, only to tell him that we had been flooded with messages from all the leading AIDS organizations in CA with deep concerns about AHF’s initiative — they are worried it could actually negatively impact access to AIDS drugs.

Those groups have tried to reach the campaign with these concerns but had hit a brick wall. We asked Sanders to designate someone in his campaign to talk with these groups, and he agreed to this.

WE DID NOT ENDORSE AHF’S INITIATIVE.

His campaign should not have issued a press release implying this was a major topic of discussion at the meeting, and that there was general agreement on the Senator’s position on this. Anything but.