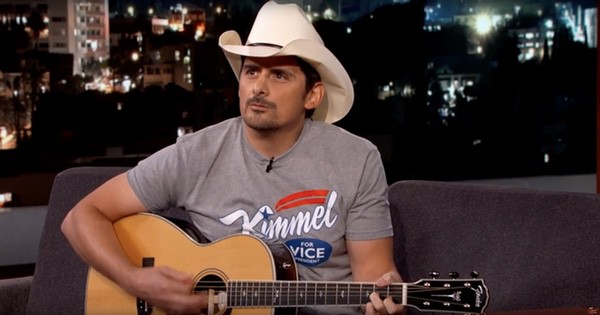 “Country music dealt with this in the ’60s,” said Paisley, before diving into his own version of Tammy Wynette’s 1968 classic “Stand By Your Man”.

Sometimes it’s hard to be a woman
Especially when you were born a man.
In North Carolina, they’re checking for vaginas…
…if you want to use the can.
(And I say) Sit by your man,
we’re all just human beings.
He’s just a human peeing…
in the stall right next to you.
Sit by your man
Why is this such a big deal?
Hike up your dress…and take a stand…
and sit by your man!

At the beginning of the segment, Paisley referred to Kimmel’s “the thing in the beginning…the restroom logo,” which was a man-on-the-street segment in which Kimmel attempted to see if strangers saw what he did in the gender neutral bathroom symbol:

Paisley also performed his new duet with Demi Lovato, “Without A Fight:”