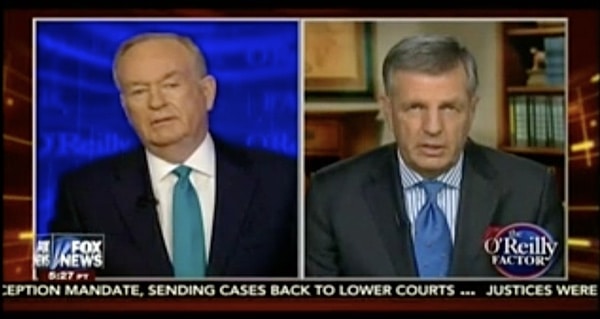 Brit Hume appeared on The O’Reilly Factor to defend his misunderstood theories on transgender people and thinks that the bathroom bills will ultimately hurt Democrats.

Hume says that Caitlyn Jenner “might not qualify” as a transgender person if she still has male anatomy:

This standard by which one becomes transgendered seems to be a little vague and hard to pin down. I mean, are you transgender because you have had surgery to change your sexual makeup, your body parts? Or are you transgendered because you decide at a given moment that you would prefer to be a member of the sex into which you were not born? One might argue that this is, you know, something that the Democrats always claimed the Republicans are, they are always saying Republicans are anti-science.

Well, if science and biology is a — science is a determining factor here, you really don’t become transgendered until you had some sort of physical metamorphosis, in which your anatomy is changed. So, Caitlin Jenner for an example, would though she clearly prefers the idea that she is a woman, might not qualify that way. I think it’s very odd to think of the possibility of people with the opposite sex’s body parts taking showers in the locker room of the other sex. It just seems to me to be something that people will find very strange and not welcome.