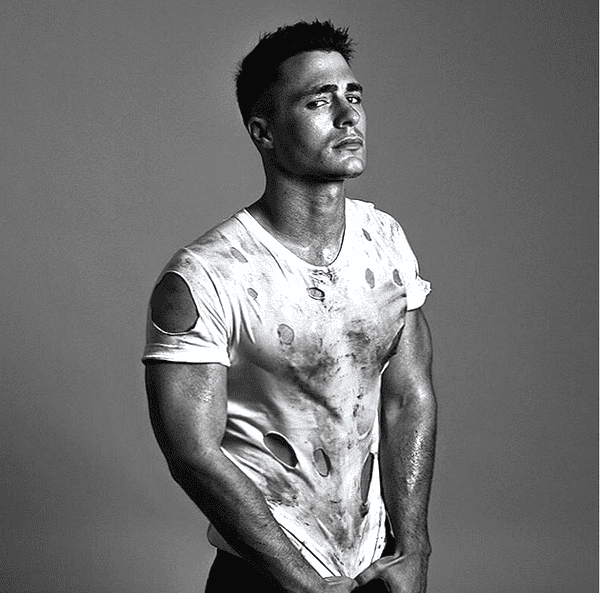 Colton Haynes has once and for all quashed rumors about his sexuality, coming out as gay in a new interview in which he addresses that Tumblr post, and his struggle with anxiety.

The actor and model is perhaps best known for his roles on the MTV series Teen Wolf and the CW superhero drama Arrow.

Speaking with Entertainment Weekly, Haynes says he never intended for his response to a question posted on Tumblr about his “secret gay past” to be a coming out.

But while social media has helped his career, it’s also gotten him into some trouble. Case in point: A Tumblr post in January sparked an Internet firestorm after a fan commented on Haynes’ “secret gay past,”regarding racy modeling photos Haynes took while underage. Without giving it much thought, Haynes offered a coy reply: “Was it a secret?” The comment was picked up by bloggers as his coming out – but it wasn’t. Not yet.

“It was a complete shock. I wasn’t ready to be back in the headlines,” says Haynes, who is in fact gay but has never publicly addressed his sexuality (and, like many others on his path, took advice early in his career to subdue it). “I should have made a comment or a statement, but I just wasn’t ready. I didn’t feel like I owed anyone anything. I think in due time, everyone has to make those decisions when they’re ready, and I wasn’t yet. But I felt like I was letting people down by not coming forward with the rest of what I should have said.”

No official announcement came forth from Haynes after his foray on Tumblr, which led to increased speculation online. He reportedly checked himself into rehab for anxiety and was frequently in and out of hospitals over the next three months.

Speaking of the particular struggles he faced coming out as gay in Hollywood as an actor, Haynes says,

“People want you to be that GQ image that you put out, but people don’t realize what it’s like to act 24 hours a day. I’d go home and I was still acting…People who are so judgmental about those who are gay or different don’t realize that acting 24 hours a day is the most exhausting thing in the world.” The truth is, Haynes has been out for most of his life – in high school, to his family and friends, to his cast members, to his Hollywood bosses (like Arrow creator Greg Berlanti, now one of his closest mentors). But as a green transplant in Hollywood in 2006, he wasn’t any more immune to the town’s well-chronicled discomfort with LGBT identity.

We here at Towleroad have covered Colton Haynes extensively over the years. I personally wrote about Hayne’s Tumblr post and I did take it as a confirmation from him that he was “out.”

However, events following his post showed that he was not ready to own that moniker, which is his right. Each individuals is on their own path towards embracing and understanding their sexual identity and must do so at their own pace. However, in my eyes, Haynes’ response on Tumblr had one strong message: “Colton Haynes Confirms He’s Gay In Coy Tumblr Post.” Which is the headline that was used in that post; a headline I stand by.

Congratulations to Haynes for opening up and sharing his struggles. He will no doubt help others fighting to love themselves and own who they are.