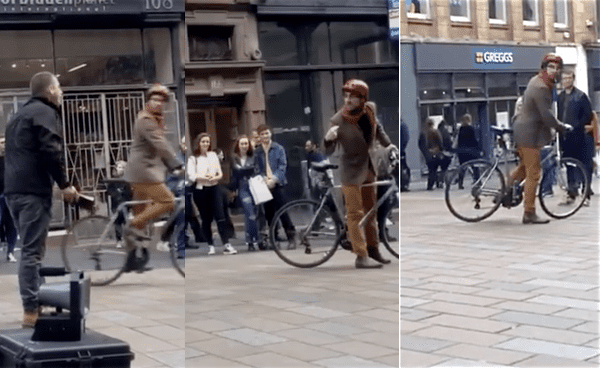 A viral video posted on Facebook over the weekend shows what happens when religious bigots are called out for their hatred.

In the video, a homophobic street preacher in Glasgow, Scotland calls for gay people to repent for their wickedness. While a group of onlookers is assembled, no one says anything to the hate monger at first. That is until a cyclist rides by and does a double take before turning back to confront the preacher. The cyclist looks directly at him and challenges him: “I’m gay! I’m gay, so say it to me.” The preacher then tells him to repent. But the cyclist is having none of it. He replies, speaking over the preacher’s hate-speech, “I love me and I don’t need a f*cking God to do it.”

It was that line that caused the assembled crowd to erupt in cheers and applause.

The poster of the video, Emlyn Pearce, who is gay himself, was able to track down and identify the cyclist as Ryan Vance. He also wrote of how inspiring it was to watch Vance stand up to the bigot:

I walk through Glasgow holding hands with my boyfriend all the time, and we have never experienced any homophobia. So to walk down the main shopping street and hear a man shouting that ‘the 99%’ need to stand up to the ‘1%’ who are gay was very sad and very scary.

Then Ryan arrived and did that thing that we all like to think we’d do but few of us ever manage: he stood up to hatred and bigotry without any fear or hesitation. And Ryan is right, we all need to start by loving ourselves, and we don’t need anybody else’s permission to do that.

Ryan Vance, as a gay man and a human being, I salute you: you made the world a better place. Thank you, sir – your pint awaits!