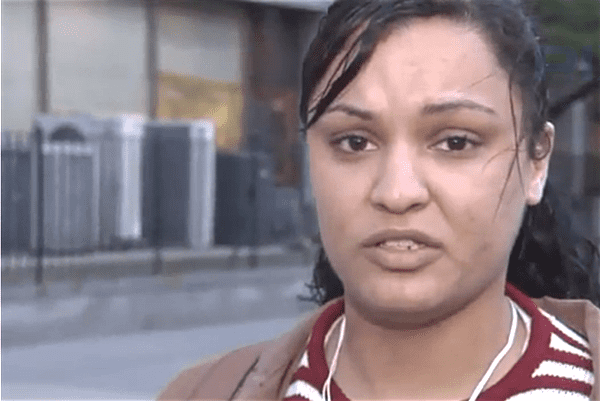 Last week, we told you about a disgusting transphobic attack that occurred on a busy New York City subway train. Now, the cisgender woman seen in a viral video of the attack is speaking out and refusing to apologize for viciously attacking Pearl Love, the transgender woman whose only crime was riding in the same car as her attacker.

In an interview with New York’s PIX11, Sarah Eldridge says she does not believe she was fully in the wrong. When asked if she would apologize to Love, Eldridge replies, “Now is not the time.”

“I meant what I said. That person offended me in a way,” Eldridge said of Love. “That person was, to me, explicit. To me, too much. To me, I couldn’t stand it. To me, this is not fair to me.”

When it was suggested to Eldridge that Love was merely existing and being herself, Eldridge told the camera, “I can’t deal with that. I guess I’m not ready.”

Though we don’t hear the words come out of her mouth, PIX11 reports that “Eldridge said she now feels like a victim” as a result of receiving death threats on Facebook after Love’s video went viral. Additionally, Eldridge tells the public, “Don’t judge me unless you know me. Don’t throw stones unless you haven’t sinned against, you know, someone yourself.”

Eldridge also said of the hate she has received since video of the attack went viral, “Don’t judge me unless you know me. Don’t throw stones unless you haven’t sinned against, you know, someone yourself.”

Juzwiak reached out to Pearl Love for her comments on Eldridge’s lack of contrition:

“Why did she judge me?” said Pearl Love when I reached out to her for a comment on Eldridge’s interview. “She doesn’t even know me. She feels that she was right for assaulting me. She doesn’t feel sorry about it.”

“I’m not angry at all,” said Love when I asked how she feels. “Why be angry? It’s not my mistake to sit in front of her. I respect people who love me, but I also respect people who don’t like me. I respect them for myself. If you are not happy with me, that’s your problem, not mine. You don’t see the beauty in me? That’s your loss.”

Eldridge is reportedly in therapy.

Watch the news report, below.