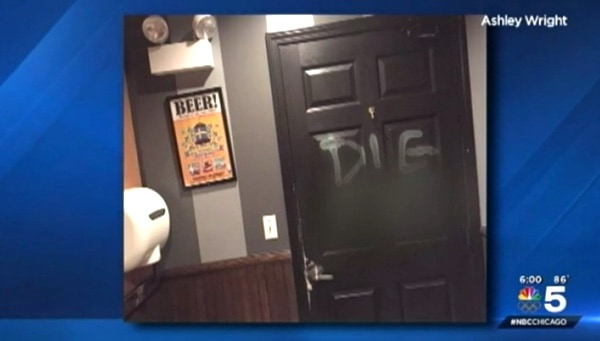 The Chicago outpost of the popular LGBT-friendly restaurant chain Hamburger Mary’s was hit by a hate crime over the weekend. Someone spray-painted “Die Fags” on the inside of the bathroom door, NBC Chicago reports:

“My first reaction when I saw it was actually annoyed,” said owner Ashley Wright. “Literally a split second later it was just sort of this gut wrenching feeling.”

The LGBT-friendly North Side restaurant, described as an “open-air bar and grille for open-minded people,” is one of 14 restaurants nationwide and one of two in Chicago. It was recently featured on an episode of CBS’ Undercover Boss.

“This was someone who came into my house, my establishment and spray painted a hateful message to me and my customers and staff,” Wright said.

The owner has since painted over the graffiti with rainbow colors and the word “Love” and notified police of the incident.

Good news: the suspect was captured on surveillance video and police are investigating.