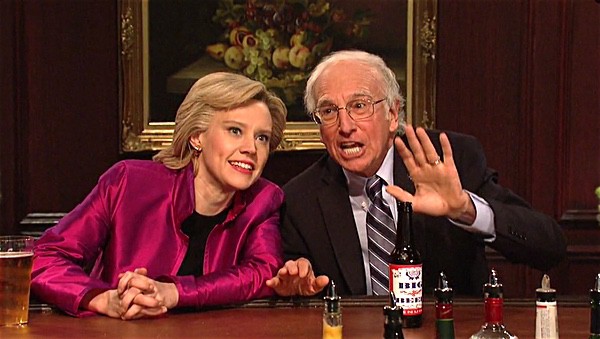 Kate McKinnon’s Hillary Clinton runs into Larry David’s Bernie Sanders in a bar in SNL’s cold open and let each other in on their deepest secrets.

Says Sanders: “You know how I constantly rail against the upper class? Sometimes when I go to sleep at night I dream about being a fancy millionaire or billionaire! And in my dream, I wear a fancy hat. I say fancy things like, ‘I’ll have a tuna sandwich…on a croissant!”

Says Clinton: “Can I tell you a secret? I’ve never told anyone this, but, you know the presidency? I really, really want it…and you know what else? I really don’t like people. I only talk to them because I want the presidency so bad.”