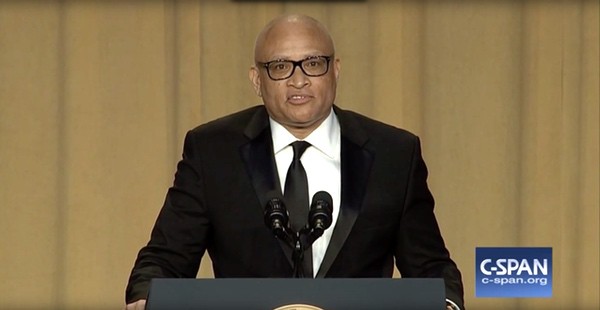 Larry Wilmore followed President Obama in the tradition of the White House Correspondents Dinner and took a much harsher approach to roasting the press (many of whom didn’t look so amused) than the President.

Wilmore received a steely glare from CNN’s Wolf Blitzer and a middle finger from Don Lemon, for these barbs:

“CNN’s here tonight. I have not watched CNN for a long time. I used to watch it back when it was a news network. I don’t know about you guys, but I cannot get enough of that CNN countdown clock. Now we can see exactly when they hit zero in the ratings.”

“Speaking of drones, how is Wolf Blitzer still on television? Ask a follow up question! Hey Wolf, I’m ready to project tonight’s winner: Anyone that isn’t watching ‘The Situation Room.’”

“Some of America’s finest black journalists are here tonight. Don Lemon’s here, too.”

Some of Wilmore’s other rapid-fire zingers:

“You look terrible, Mr. President. No, you do, man. Look at you. Your hair is so white it tried to punch me at a Trump rally.”

“I am confused with Bernie Sanders’s stance on guns. He seems to be anti-gun everywhere except Vermont. Bernie doesn’t care who gets a gun in Vermont. There are no black people in Vermont.”

“MSNBC is here tonight. Yep, which actually now stands for ‘Missing a Significant Number of Black Correspondents’. . .  MSNBC got rid of so many black people, I thought Boko Haram was running that network.”

“Chris Christie was supposed to be here tonight. I don’t know if he made it. He RSVPd for three: He, his wife, and Donald Trump’s dry-cleaning. I shouldn’t make fun. Chris lost a lot of weight recently, didn’t he? This is what he said, he said he just eliminated everything from his routine that wasn’t necessary. Like his self-pride and dignity.”