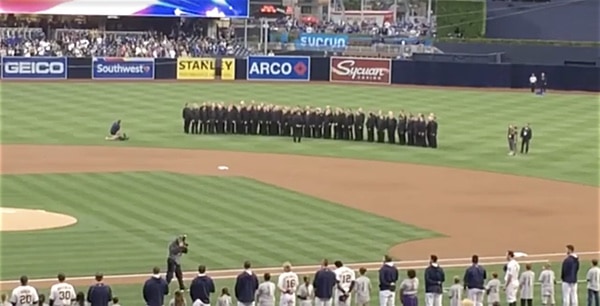 As we reported over the weekend, the gay men’s chorus took the field to sing the national anthem but as they were set to start their performance, a recording of a woman singing the Star-Spangled Banned blared throughout the stadium. The song was not stopped and the chorus was led off the field to jeers from the crowd.

The Padres apologized to the San Diego Gay Men’s Chorus for the incident and fired the contractor supposedly responsible for what the ball club called an “unintentional mistake.”

Now, MLB spokesman Pat Courtney says he is looking into why the gay men’s chorus was unable to perform at Pride Night.

“It’s difficult to say a timetable,” Courtney said. “It depends how long it is, in terms of where the information takes you. The plan is and the goal is, as expeditiously as possible.” […]

Courtney said the Padres reached out to his office.