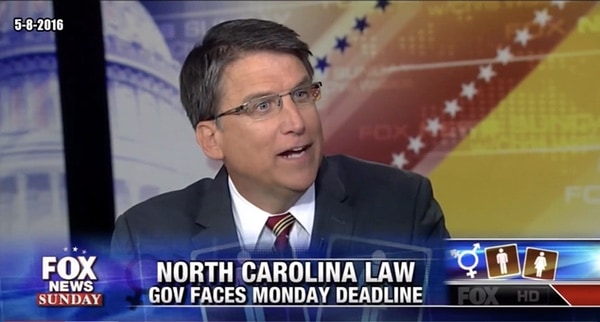 North Carolina Governor Pat McCrory sat down with Chris Wallace on FOX News Sunday. Wallace grilled him on how he plans to respond to a letter sent to him by the Department of Justice which gives North Carolina until Monday to say they’ll stop enforcing the anti-LGBT ‘bathroom’ law HB 2.

Should McCrory choose to defy the feds, hundreds of millions of dollars in federal funding is at stake.

McCrory notes that the Department of Transportation is also looking at cutting off funding for the state.

McCrory says that three working days is not enough time to respond to “such a threat” and said that he asked the DOJ for an extension and they replied that they would offer a one week extension “if the governor admits publicly that their language regarding bathrooms does in fact discriminate.”

Adds McCrory: “I’m not going to publicly announce that something discriminates which is agreeing with their letter because we’re really talking about a letter in which they’re trying to define gender identity. And there is no clear definition of gender identity. It is the federal government being a bully. It’s making law by their interpretation…I’m discussing all of our legal options, all of our political options.”

Asks Wallace: “You call this a case of Washington overreach. Would it be overreach for the Justice Dept to send you a letter like this to say you cannot have bathrooms in the state capitol one for white and one for black?”

Replies McCrory: “We can definitely define the race of people. It’s very hard to define transgender or gender identity.”

Wallace explains that the Justice Department defines transgender people as a protected class like race.

Replies McCrory: “That’s what they say but that’s not what the federal law says. The federal law uses the term sex and Congress does not define sex as including gender identity…So right now the Justice Department is making law for the federal government.”

Says Wallace: “It sounds like you’re going to challenge this in court.”

When Wallace asks him how many cases have they had in North Carolina where people have been convicted of using transgender protections to commit crimes in bathrooms, McCrory doesn’t have an answer, so returns to his blaming the Democratic Party for HB 2.

Insists Wallace: :”If there’s no problem then why pass the law in the first place?”

McCrory, clearly flustered, keeps turning the blame back to the Left:

“There can be a problem because the liberal Democrats are the ones pushing for bathroom laws and now President Obama and the mayor of Charlotte wants government to have bathroom rules. We did not start this on the Right.”