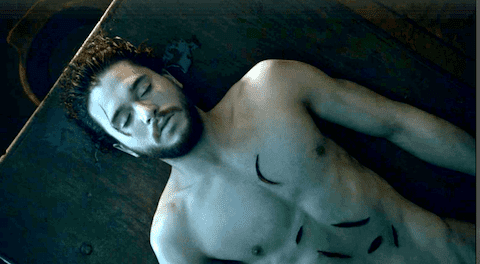 The only magic I typically care about is Magic Mike, but on last night’s episode of Game of Thrones, “Home,” Melisandre had the chance to prove if her powers were legit or if it’s all just a bunch of hocus pocus. In one of the most hotly anticipated scenes of the series, Melisandre attempted her greatest magic show yet.

Find out if she was successful, plus which two kingdoms had their rulers violently overthrown, which two prisoners have been released from their chains and which two characters became puppy chow in our recap below. 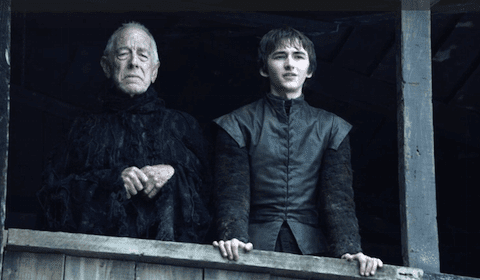 Meanwhile, Somewhere In The North …
Bran, you betta Warg. Our young Stark is back and not only warging his way into other people’s minds, but also Doctor Who-ing his way through time. He visits the Game of Thrones Muppet Babies versions of his father along with Ned’s brother Benjen and their sister Lyanna. It’s just kids being kids, until we see a potential sparring partner for them. It’s Hodor! Except his name is Willis, and he can talk. Oh, dear, what happened to you, Willis? Show us on the doll where they hodor’d your hodor.

The Three-Eyed Raven brings Bran back to the present, much to Bran’s disappointment. Finally, he was seeing something worth his time.

Outside their Cave of Wonders, Meera is having a pout about being cooped up inside. Bran and Hodor do their best don’t be cry, but it’s no use. One of the Children of the Forest helpfully appears to remind Meera that Bran needs her. 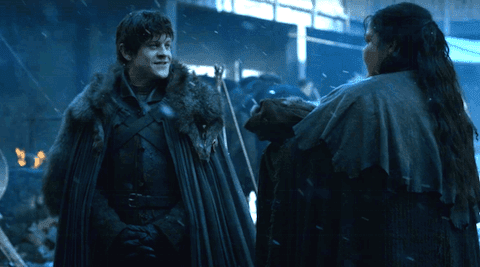 Meanwhile, In Winterfell …
Ramsay is having a little strategy pow-wow with his dad, suggesting they should totally just stab Jon Snow. The elder Bolton knows you can’t just go around murder-torturing away all your problems, so he warns against turning the North against them by murder-torturing their most beloved bastard son.

All the scheming will need to wait, anyway. There’s much to celebrate, like Roos’ new baby boy/ Ramsay’s younger brother. Lady Walda gave birth to a healthy little baby, but before Ramsay can get himself an “I’m the Big Brother” t-shirt, he congratulates his dad with a dagger right to the belly. Ramsay tells Roos’ men to say his father was poisoned by his enemies with, I guess, a really specific poison that somehow bursts into your stomach like a knife. Sure. If only they had C.S.I. Westeros, his whole plan would be ruined is all I’m saying.

Ramsay sends for Lady Walda and the baby, both of whom are looking great, considering she just gave birth in a place with no epidurals or pre-natal care and no hot peds docs to ease the labor process. Walda, like a dummy, follows Ramsay right into where they keep the hounds, and, despite her pleading to let them go, he turns them into Kibbles and Bits for the dogs.

Out in the wood, Sansa and Brienne are recounting Bri’s run-in with Arya and the Hound. Brienne tells Sansa that Arya looked good, if not a little butch, to which Sansa has the cutest little smile. (Go on, Arya, you dismantle the patriarchy! Gender is a construct! Subvert the dominant paradigm!) During their little huddle, Theon decides that maybe Jon Snow won’t be so happy to see him after all the betrayal and faux murder of his brothers. So, Theon is going home to Pyke, because he really doesn’t want that kind of drama right now. One small problem with that … 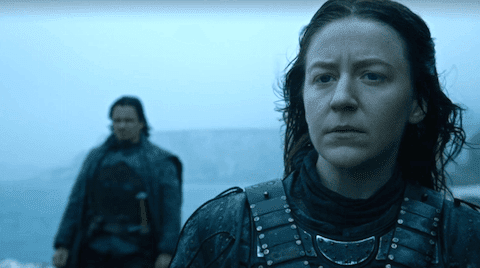 Meanwhile, In Pyke …
Balon Greyjoy is being a real pill with his daughter, Yara, as they engage in the usual Game of Thrones small talk. You know, who’s marching on whom, who took whom’s castle, etc. and so on. Balon heads out on the not-at-all ominous creaky rope bridge swinging perilously over the raging sea. On the other side of the bridge, a figure appears. It’s Balon’s brother, Euron. The two engage in some light verbal sparring, with Euron telling Balon ‘boy, bye’ and tossing him over the side and into the sea below.

Balon’s body is recovered and set up for his funeral. Yara swears vengeance, but she’s reminded that the Ironborn don’t just hand over rule by birthright, necessarily. They need to have a kingsmoot, which means all the ship captains and super delegates come together to vote on the new king. Yara obviously wants her shot to be the first female ruler of the Ironborn, but with Euron skulking about and Theon heading back, it’s going to be an uphill battle. #ImWithHer. 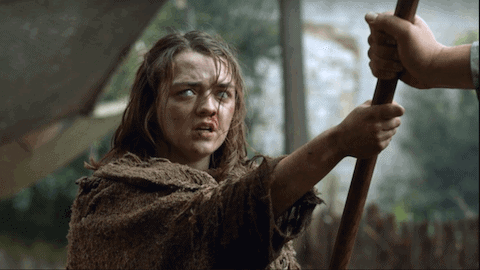 Meanwhile, In Braavos …
The Waif shows up for Blind Arya’s daily beating, and it goes just about as expected. Arya gets whacked about the head a few times until Jaqen H’ghar shows up to tempt Arya with offers of food and shelter and our grand prize of a brand new set of working eyeballs so Blind Arya won’t be Blind Arya anymore. All she’s got to do is say her name. Arya is too smart for this. She sticks to her guns that she’s no one and has no name. Right answer! Jaqen leads her away, seemingly accepting her back into his tutelage. And, maybe he really does have the power to restore her sight. We’ll see! (And maybe she will, too.) 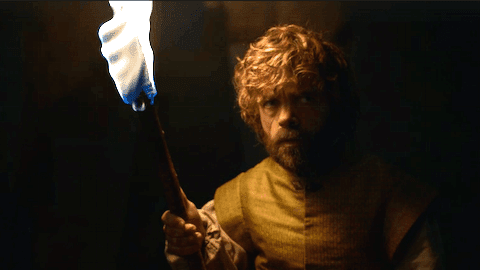 Meanwhile, In Meereen …
It’s always five o’clock somewhere, which means it’s happy hour for Tyrion. He’s pounding the grape with Varys, Greyworm and Missandei, discussing how Slavers Bay has mostly reverted back to the slavers’ control. With their Queen gone missing, things are looking not so great. But, as Tyrion reminds them, they’ve got one more trick up their sleeves: the dragons.

Off tipsy Tyrion goes, skipping into the temple where the dragons are chained up. He’s got this theory that the dragons will know he is friend, not food, and let him cozy up to them. The dragons seem a little hostile at first, but Tyrion regales them with tales of how all he wanted was  a dragon for his name day. The dragons are like whatever, dude, just take off these chains. Tyrion unshackles the dragons, and, as soon as they’re free, they walk away back to the darkness before Tyrion can even tell them about that one time he shot his daddy with crossbow. Oh, well, the important thing is that they’re free now. Hide yo kids, hide yo wife, hide yo goats. 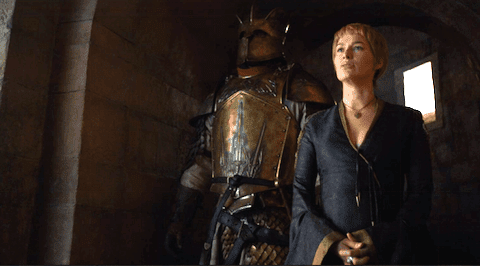 Meanwhile, In King’s Landing …
Cersei’s shame walk is still the talk of the town. Some drunk Westerbro is bragging about flashing Cersei his little kingslayer to a crowd of drunkards. He goes to relieve himself in an alley when Ser Robert Strong comes along and bonks his brains out against the wall. That’ll teach ’em.

Ser Strong is less helpful in escorting Cersei to Myrcella’s funeral. King Tommen has ordered his mommy must be kept safely away from the Sept, otherwise the High Sparrow might imprison her again. His daddy, Jaime, meets Tommen at Myrcella’s body and assures him that no one will put mommy in the clink ever again. Jaime sends Tommy to visit Cersei and apologize for barring her from her daughter’s funeral. Tommen tells mommie dearest he’s sorry he was such a wussy-pussy. He asks her for help being strong, and, of course, she agrees. Don’t call it a comeback, kids, but it’s time for a Lannister/Baratheon resurgence.

Alone with Myrcella, the High Sparrow joins Jaime, but before Jaime can layeth the smacketh down, a bunch of other Sparrows show up and look menacing. It’s all very “Lannisters, come out and play-ay.” 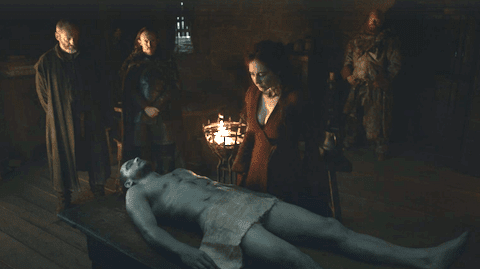 Meanwhile, At the Wall …
Alliser has waited long enough, and he finally tells Davos and company that he’s going to huff and puff and blow that door in. Before he has the chance to smash completely though, there’s an even larger pounding on the gates of Castle Black. Surprise! It’s a Wildlings party and everyone — including a giant — are invited! The Night’s Watch doesn’t even bother really mounting an offensive, because, come on, they’ve got a giant. Alliser and his co-conspirators are tossed in cells, allowing Davos to have a little chat with Melisandre.

Luckily, Melisandre is no longer rocking her #nomakeup selfie. In her typical pouty sex-witch mode, Melisandre tells Davos that she’s lost the faith. Davos explains that he’s not a religious man, but he is, like, spiritual, you know? And seeing Melisandre do her freaky shadow birth thing made him believe in miracles. So, can she make with the resurrecting of Jon Snow now?

Mel washes down Snow’s wounds, give him a little makeover, trimming up his beard and hair, and then says the magic words: Mekka-lekka-hi, Mekka-hiney-ho (or something). After repeating the refrain a few times, she utters a desperate Please, but no luck. One by one, the characters exit the room in dramatic fashion, until only Ghost the direwolf and Snow’s body remain. The camera hovers over the lifeless body for a few moments, until — surprise, bitch! — Snow takes a deep inhale. He’s alive! Or something like it! Will he be the same?