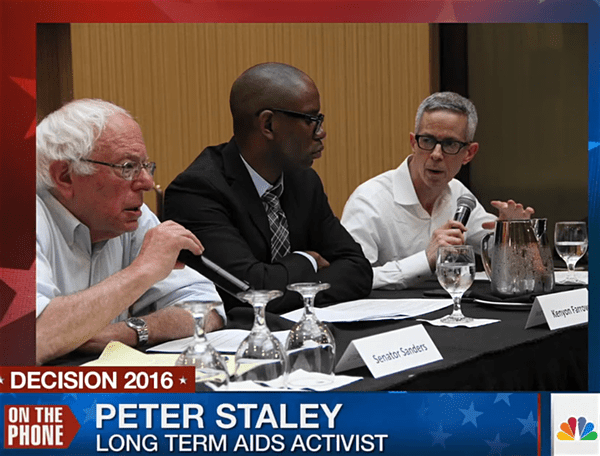 Prominent HIV/AIDS activist Peter Staley appeared on MSNBC’s AM Joy over the weekend to discuss the Bernie Sanders campaign’s attacks on him and his work.

As we reported, Sanders finally met with Staley and other HIV/AIDS activists after first cancelling a planned get-together. However, the campaign incensed those activists by putting out a misleading press release saying that the group had endorsed a California ballot initiative created by AIDS Healthcare Foundation (AHF) to lower prices for taxpayer-supported AIDS treatments. Not only was that not the case, but Staley and many other activists have been at odds with AHF President Michael Weinstein over AHF’s opposition to preexposure prophylaxis (PrEP).

After Staley and others criticized the Sanders campaign for mischaracterizing the outcome of their meeting, Sanders’ policy director Warren Gunnels blasted Staley on Twitter, writing, “‘Activist’  who absurdly said @BernieSanders is running a campaign of hate made a fortune from big drug companies.”

Staley and his supporters, including Dan Savage among many others, quickly fired back against Gunnels on social media.

Millions of gay men alive & able to vote today thanks to @peterstaley. Attack on Peter from Sanders camp appalling. pic.twitter.com/LjUyi7x2vQ

Speaking with Joy Reid, Staley corrected the record and fought back against Gunnels’ assertion that he took money from Gilead and “big pharma.” Staley says he has been an outspoken critic of Gilead and has not received a “fortune” from it and other drug companies.

Of the personal attacks launched against him by the Sanders campaign, Staley told Reid, “I don’t quite understand where that’s coming from.” Staley also noted that Gunnels deleted his accusatory tweet. “I guess that’s an apology of a kind,” Staley said.

As for the “campaign of hate” barb, Staley says it dates back to a comment he made on social media about the increasingly negative rhetoric put out by Sanders and his surrogates. He says on Facebook,

My apologies to Warren Gunnels. I found a buried Tweet where I linked to a Michael Cohen op-ed in the Boston Globe (http://bit.ly/1pTWicc) that slammed Sanders for his campaign of character assassination against Clinton, where I said “sad it’s morphed from progressive ideals to a campaign of hate.” I decided to apologize in Gunnels style by deleting the tweet. 🙂

Watch Staley talk with Reid, below.