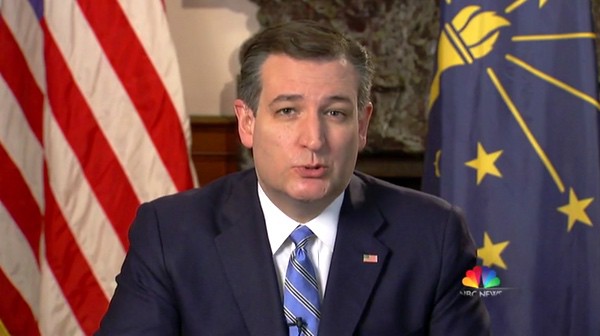 Even though the right-wing myths about what happens have been debunked many times (as recently as last week by FOX News anchor Chris Wallace), Ted Cruz continues to hammer home his fear-mongering about the consequences of transgender “bathroom bills” and according to the NYT, the strategy is working for him, at least in Indiana.

“Donald Trump came out on television agreeing with Barack Obama and Hillary Clinton that grown men should be allowed to use little girls’ restrooms. Now I view this issue as a matter of basic common sense. I don’t think it’s a right or left or Republican or Democratic issue. It’s common sense. Look, I’m the dad of two little girls. It doesn’t make any sense to allow grown adult men – strangers – to be alone in a bathroom with a little girl – and virtually all Americans understand that. And it is only the height of political correctness that refuses to acknowledge this.”

Chuck Todd then asked about Caitlyn Jenner’s recent stunt in which she used the bathroom in a Trump Hotel in New York City and then emerged with a message directed at Cruz: “By the way Ted, nobody got molested.”

“If you pass a law that says any adult man can go into a girl’s restroom if he feels like a woman at that minute… Look the real danger is not people who are transgendered it’s people who are predators. People who are predators who use that law as an excuse to go target our kids. … The reason Donald Trump’s comment is so revealing…he said a few months ago, ‘I can be the most politically correct person on earth’. This is political correct nonsense. People want someone who tells the truth. Donald is playing a role and pretending to be something he’s not. I’ve been the same yesterday, today, and tomorrow.”