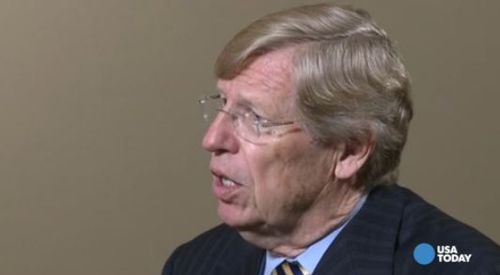 HRC announced on Wednesday that Olson will write an amicus or ‘friend of the Court’ brief in support of the DOJ’s suit.

Olson, who previously served as the U.S. solicitor general under George W. Bush, has argued dozens of cases in front of the Supreme Court. The conservative lawyer became an unexpected ally of the left when he took up the case against Prop 8, the California ballot measure banning same-sex marriages, in 2009. The case eventually reached the Supreme Court in 2013, when the justices upheld a lower court’s decision to overturn the ban.

“HB2 discriminates against fellow citizens because of who they are,” Olson said in a statement. “This law directly challenges the legitimacy of the identity of transgender persons and then compels them to deny it every time they use a public restroom. There can be no doubt that this is bad for business in North Carolina.”

“HB 2 is a hateful piece of legislation that has not only harmed thousands of people across North Carolina, but hurt companies and damaged the state’s economy. We are proud that Ted Olson, one of the nation’s leading conservative legal minds, will lead a brief on behalf of the business community and advocate for the equal rights and dignity of transgender Americans.”