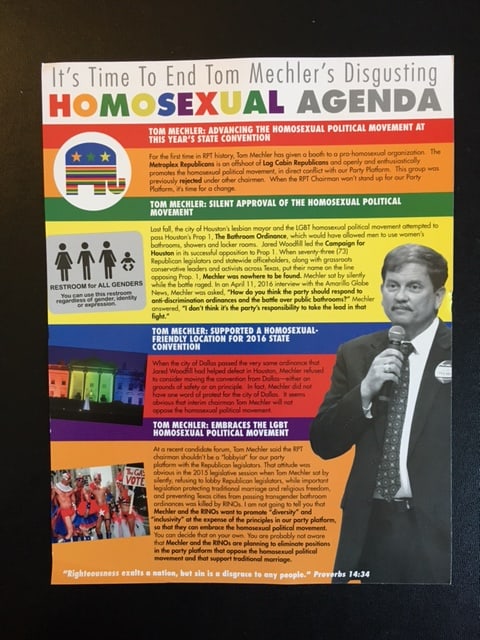 Back in February, we mentioned that the Texas GOP’s 2016 state convention would include an LGBT booth, sponsored by the Metroplex Republicans, for the first time in its history this year.

The decision to allow the booth prompted Texas Eagle Forum President Cathie Adams, who’s running for vice president of the party, to suggest that it would scare away parents who didn’t want their children to be exposed to LGBT people during the event.

Now, with the convention set to begin Thursday in Dallas, anti-gay Houston bigot Dr. Steve Hotze has sent out the above flier attacking the current chair of the party, Tom Mechler, for allowing the booth.

Hotze supports Jared Woodfill, who served as spokesman for the campaign to repeal Houston’s Equal Rights Ordinance and is running against Mechler for chair.

In fact, Woodfill announced his candidacy for state party chair at a rally last summer where Hotze wielded a sword on stage and pledged to drive “homofascists” out of Houston and back to San Francisco.

Mechler said that he did not have anything to do with the decision to allow the group, the Metroplex Republicans, to have a booth at the state GOP convention.

“I understand that hatred has spewed into the chairman’s race,” Mechler said. …

“Mechler and the RINOs want to promote ‘diversity’ and ‘inclusivity’ at the expense of the principles in our party platform, so that they can embrace the homosexual political movement,” the mailer states. RINO stands for “Republican in name only,” a jab that staunch conservatives like to take at those they deem insufficiently to the right. …

Rudy Oeftering, vice president of the Metroplex Republicans, said he was happy with the decision and excited about the booth.

“We know there are people upset out there,” he said. “The booth will be very positive.”

In fact, the booth was only allowed because Metroplex Republicans agreed not to use it to promote LGBT rights.

As for Mechler, he once said he’d cancel his subscription if his hometown newspaper ever published a photo of a gay couple kissing. But apparently that’s not anti-gay enough for some Texas Republicans.