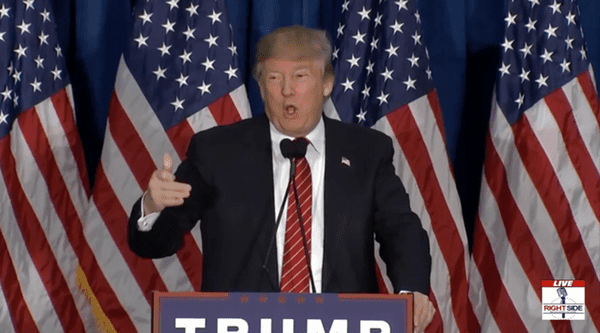 Donald Trump gave an interview to the Washington Post on Monday saying he would rescind President Obama’s sweeping directive to U.S. schools on transgender rights but said that trans people need to be protected:

…Asked whether he thought the issue had been overblown, Trump said: “I don’t think so, because you’ve got to protect all people, even though it’s a tiny percentage of 1 percent. I think from that standpoint, [states] should come up with a policy that’s going to work for everybody and protect people.”

RELATED: Obama to Direct Every U.S. School District to Allow Trans Students to Choose Their Own Bathrooms

Trump said he did not know any transgender people nor knew of any who worked for him.

He said he did not view the issue the same way as Obama did: “I think it’s a people thing. I think we have to help people. I don’t view it as civil rights or not civil rights. I think it’s something where we have to help people — and hopefully the states will make the right decisions…It’s actually a very interesting subject to me. It’s certainly an issue that’s getting a lot of play and it’s an issue that I’m studying very closely.”