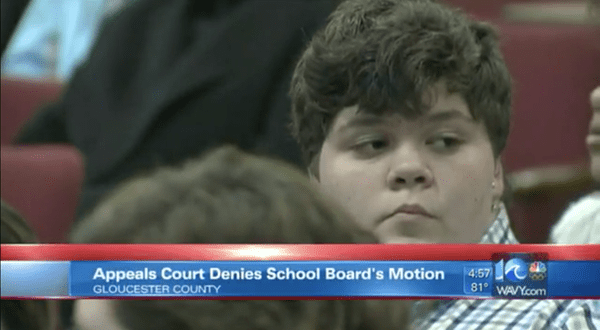 The U.S. 4th Circuit Court of Appeals has denied a request from a Virginia school board to stay its decision ruling that transgender students must be allowed to use bathrooms in accordance with their gender identity.

Earlier in the week, the 4th Circuit granted a customary but temporary stay of its ruling while it considered the request for a stay.

The school board now says it will appeal to the U.S. Supreme Court.

Earlier this week, the school board says they planned on filing a petition with the U.S. Supreme Court asking for a review of the federal appeals court decision. While the Supreme Court decided whether or not to take the case, the Fourth Circuit Court of Appeals was expected to hold off on their final ruling.

However, the federal appeals court announced their decision Thursday. This means Gavin Grimm can use the men’s restroom right now, even though the school board has signaled its intent to appeal to SCOTUS.

Watch a news report from WAVY, below.

And read the court’s order denying the request for a stay, here: