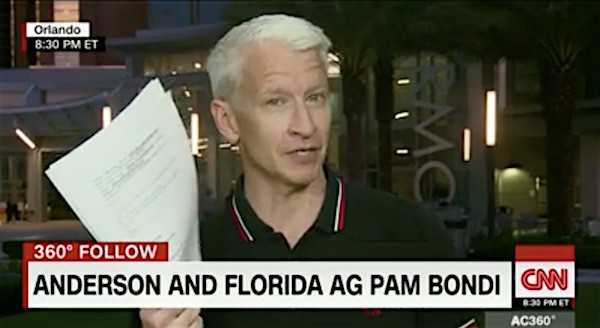 Yesterday we reported that Florida Attorney General Pam Bondi called into a friend’s radio show to complain about what she called Anderson Cooper’s “extremely disappointing” behavior towards her yesterday in an interview on CNN.

As we reported, Cooper on Tuesday held Bondi accountable for her entrenched opposition to gay marriage over the years. Cooper particularly went after Bondi for the argument her office used to oppose same-sex marriage, that allowing gay couples to wed would cause “significant harm” to the state of Florida.

Speaking on WOR’s “Len Berman and Todd Schnitt in the Morning”, Bondi yesterday said she was blindsided by Cooper’s questions on gay marriage and that he “completely flipped and got into a constitutional issue of course.”

Now, Anderson Cooper is not letting that sit. In a segment on AC360 last night, Anderson responded to Bondi’s claims, blasting the Attorney General for misrepresenting what the interview was supposed to be about and standing by his duty to hold Bondi accountable for working to pass anti-gay legislation while trying to put a compassionate face toward the LGBT community in the wake of Orlando.

Let’s be real here. Miss Bondi’s big complaint seems to be that I asked in the first place, in the wake of a massacre that targeted gay and lesbian citizens about her new statements about the gay community and about her old ones.

The fact is, Attorney General Bondi signed off on a 2014 federal court brief that claimed married gay people would pose ‘significant public harm’. Harm. She spent hundreds of thousands of dollars in taxpayer money. Gay and straight taxpayers money, trying to keep gays and lesbians from getting the right to marry. Now look, good people can and do disagree on that issue. everyone has a right to their own opinion thank goodness. But Ms. Bondi is championing right now her efforts to help survivors but the very right which allows gay spouses to bury their dead loved ones – that’s a right that would not exist if Ms Bondi had had her way. I think it’s fair to ask her about that. There is an irony in that.

For the record, here’s their full interview.