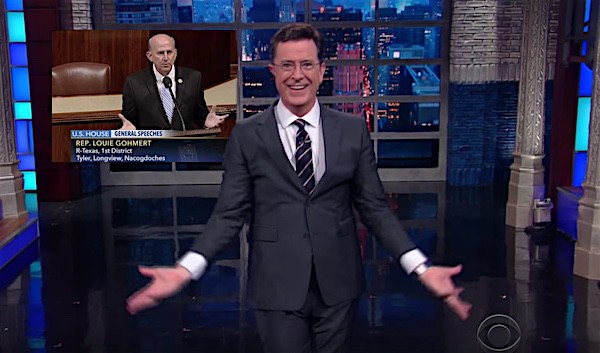 As you may have seen, Congressman Louie Gohmert (R-TX) last week argued that spending time and resources fighting for equal rights for LGBT people is a waste of time because humanity would never choose same-sex couples to populate a space colony should there come a time when we had to abandon Earth.

RELATED: Texas Congressman: No ‘Perverse’ Gays Will Be Chosen for Space Colonies – WATCH

Colbert explains, to his audience’s delight, why Gohmert’s argument is so very flawed:

“There were actually only 8 people on Noah’s Ark, and they repopulated the entire world, which means, by his own logic, the remaining 32 people on Louie Gohmert’s space ark could be gay gay gay….And, if that happened, only two years after it launched that spaceship would be the most expensive neighborhood in the galaxy.”

Colbert added: “By the way, I don’t even know why we’re making this distinction because after six months on a spaceship, everybody’s gay….Have you seen the movie The Fifth Element?”