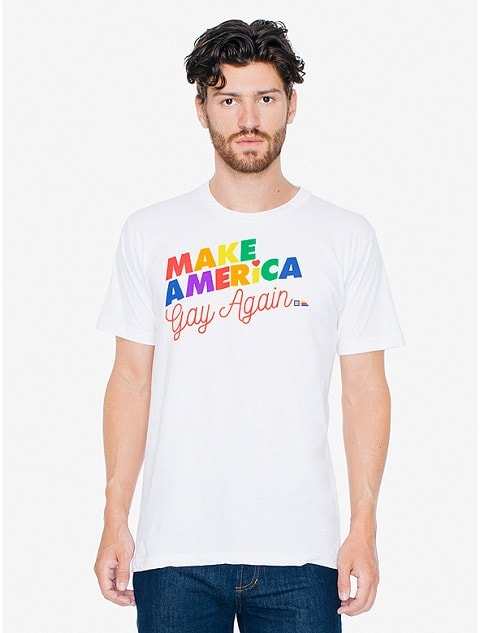 The campaign will also include video content and in-store events. A “Make America Gay Again” mixtape, curated by musician Jack Antonoff and inspired by songs that stand for equality, will be available on Pandora.com June 14. Thirty percent of sales will be donated in support of the Equality Act and the fight to end LGBTQ discrimination.

“Rachel and I founded The Ally Coalition to inspire fans to take action for LGBTQ Equality. During a year where LGBTQ rights are being threatened all over the states, everyone is responsible for coming together and challenging these injustices. I’m proud that The Ally Coalition is joining with American Apparel and The Human Rights Campaign to #MakeAmericaGayAgain.”

“Today, LGBTQ people remain at risk of being fired, evicted or denied services in a majority of states simply because of who they are. That’s why we are fighting to pass the Equality Act – legislation that will protect LGBTQ people under our federal civil rights laws.

“We are excited about our partnership with the Ally Coalition and American Apparel, which empowers people to subvert the politics of hate and division by creatively speaking out for the equal rights and dignity of LGBTQ people.”