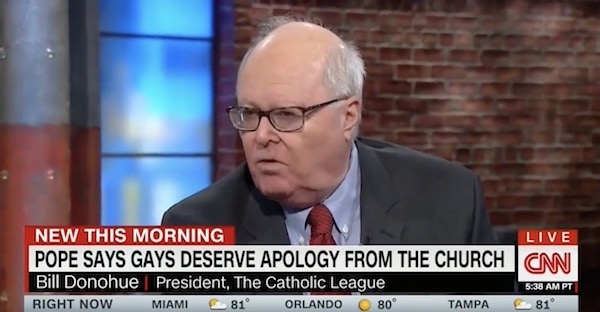 Chris Cuomo invited Catholic League mouthpiece Bill Donohue on CNN’s New Day for a reaction to The Pope’s remarks that the Catholic Church should apologize to and seek forgiveness from gay people and Cuomo got the meltdown he expected.

Donohue and his Catholic League (once accurately described by Kathy Griffin as “a man behind a computer”) have a history of demonizing gay people, so his reaction was predictable when Cuomo asked, “Do you feel like apologizing to the LGBT community?”

“No,” screeched Donohue. “As a matter of fact, I want an apology from gays! I’ve been assaulted by gays. I’ve never assaulted a gay person in my entire life!”

“Why is it so important to you to denounce gays?”, asked Cuomo bringing up Donohue’s multiple appearances on the show whenever an LGBT event makes news. Donohue claimed that it was Cuomo’s producers begging him to be on.

Donohue then claimed that when he was in the military he defended gays who were being bullied, “because I don’t care what gay people do.”

“I don’t want to have a lifestyle thrusted in my face though!”

“What do you mean thrusted in your face, asked Cuomo. “How are they putting their gay on you?”

Donohue then dove into an argument that religious people should be allowed to discriminate against gays.

Cuomo responded by bringing up the Pope’s remarks that gay people shouldn’t be judged, which really sent Donohue over the edge,